In a chapter of Cynthia Freedland’s book, Portraits & Persons, the philosopher proposes that portraits are images of persons that fulfil one or more of the following features:

Such criteria may seem obvious but, in practice, they are particularly difficult to create. For many artists, an accurately-rendered physical likeness is not enough. The effects of light and dark are emulated, materials and textures replicated, all to establish the sitter’s presence in space, evoking a sense of real ‘contact’ between artist and sitter or sitter and external viewer. Traces of a person’s psychology, temperament, or ‘essence’ are transmitted visually in the way they stare or avoid the viewer, the placement of their hands, the way they stand or sit, even the way they dress; nowadays we refer to these things collectively as body language.

But to what extent can a fusion of these features replicate a real-life encounter between artist and sitter five centuries in the past? This is the topic explored in the National Portrait Gallery’s latest exhibition ‘The Encounter: Drawings from Leonardo to Rembrandt’, featuring 48 drawings from British collections presented in three modestly-sized rooms.

Despite the title of the exhibition, Leonardo da Vinci and Rembrandt are only represented by a single drawing each. Leonardo’s red chalk study of a nude man belongs in the workshop tradition of the Renaissance, where garzoni (workshop assistants) posed for their masters to be used in new compositions and to study human anatomy. One of the earliest products to come out of this life drawing practice is Pisanello’s pen-and-ink drawing of a man with his hands tied behind him.

Such drawings contributed to a workshop’s repertoire of stock motifs and designs, especially to the model-book tradition. Model-books contained valuable designs and drawings that could be re-used and employed for large compositions. Oftentimes they were a source of exemplary examples for assistants to copy from and learn the style of the master painter. Many of these contained drawings of heads (real, imaginary, or copied from existing paintings) – as in a sheet of character studies from the workshop of Hans Holbein the Elder– or hands and feet because they were the most frequently used. This tradition continued well into the seventeenth century as demonstrated by Rembrandt’s sheet of figure studies.

Drawing from observation was a key component of an artist’s training, starting from copying sculpture and existing works of art to creating a likeness of an individual. These could be the previously mentioned garzoni or simply friends and family. Most portraits in this exhibition are of unidentified individuals; this is where the show shines. We are forced into an encounter with a past individual whom we know nothing about. To us, they are strangers on the street.

Some of these individuals are young men wearing caps, a common sign that they inhabited the world of the artist. One of them has his head raised up, confident and bright, with curly hair, drawn in metalpoint by Benozzo Gozzoli and illuminated using white heightening. Nearby, an older man has been captured looking down with a concentrated expression, perhaps staring at an object before him; this may or may not be the sculptor Mino da Fiesole, seen through the eyes of his contemporary, Filippino Lippi. Scruffy-looking men enforce a very real presence through Leonhard Beck’s colourful use of red and black chalks whilst a few formal, even charismatic, self-portraits by Peter Oliver and Domenico Beccafumi catch a glimpse of their own reflection in a mirror.

The artist’s studio was a hub of creative inspiration and source material. Models could be sought from anywhere in the vicinity: the boy grinding pigments, the apprentice preparing a wooden panel, a visiting friend. A small selection of drawings attempts to evoke a sense of the Carracci studio, an academy of art in Bologna founded by the cousins Ludovico, Agostino, and Annibale Carracci in the early 1580s. The latter’s portrait of the lutenist Giulio Pedrizzano captures a fleeting moment when Pedrizzano’s intense stare meets the artist’s eyes, or so we are led to believe in the confident pen-and-ink lines that make up this arresting image. By contrast, a young man with short hair and a round face fixates his eyes towards the top-right corner of the image, as if responding to the artist’s formal instruction.

For many artists, some of the most difficult subjects to draw were children. Impatient and irritable, there was also a tendency to evoke childhood innocence in their representations; Gian Lorenzo Bernini’s drawing of a young boy wearing a wide collar gives off a rebellious attitude like present-day adolescents. Yet the opposite is also true: the tendency to depict children as if they were adults. A little girl wearing an apron stares at the viewer with a poise and formality found in women of high status. A fusion of both can be found in Parmigianino’s portrait of a young boy, possibly Troilo II de’ Rossi, shown in profile like an antique medallion with an expression that is calm but somewhat fearful for the future ahead; this is an unexpectedly intimate image that can move the observer with sustained viewing.

One of the highlights of this exhibition is the presentation of several wonderful drawings made by Hans Holbein the Younger in the court of Henry VIII, including the inquisitive portrait of John Godsalve at the entrance to the show. Portraiture was the language of the court, capable of imbuing the sitter with compelling qualities and virtuous ideals. John More, only son of Sir Thomas More, is shown reading a book, summarily rendered; his features are carefully modelled in coloured chalks, whilst his striped garments are bold in their conception.

Holbein the Younger’s drawings are careful and sensitive, especially in his portraits of women. A young woman wearing a French hood, possibly Mary Zouch, glances downward timidly to her right, her body facing the viewer frontally with an upright posture, arms presumably on her lap. Her individualised features are delicately revealed in coloured chalks, creating an image that is worthy of being called ‘realistic’. In another front-facing portrait, a woman wearing a white headdress gazes at the viewer with a directness that is uncomfortable and intruding. One truly feels as if one is locked into a real encounter with this possibly bemused sitter, and in doing so one notices her individual eyelashes and eyebrows, as well as and slight indications of shadow on her eyes. Like the previous drawing, the warmth of her skin is suggested using very pale red chalk. As one examines the details of this captivating drawing, one also realises that her portrait was cut and pasted onto a separate piece of paper. The illusion is broken, only to be reconnected by her unforgettable gaze. For a moment, one feels as if the sitter’s ‘air’ has been discovered.

The function of portraiture in the court is evident: they were visual records of significant figures in history and their attributes. Some of the drawings displayed in the exhibition were made for eventually creating a painted portrait, such as Albrecht Dürer’s drawing of Henry Parker, 10th Baron Morley, who had been sent by Henry VIII to Nuremberg in the winter of 1523; this drawing provides a sense of what Dürer’s painting of Parker would have looked like.

Yet, the role of drawn portraits in a non-courtly setting are far less easy to identify. The general assumption is that drawn portraits were made for pleasure, sometimes given as gifts to friends; a sense of familiarity is detected in Carlo Dolci’s portrait of his shoemaker. We can appreciate the artist’s virtuoso handling of black chalk to mimic the surface detail of thick cloth, or Francesco Salviati’s contour hatching which gently sweeps across the light and dark areas of a young man’s face. 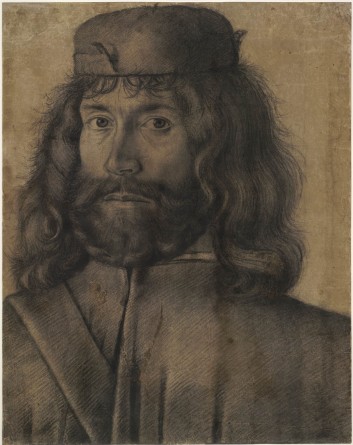 As one turns the corner, a grumpy-looking old woman with her hand supporting her cheek squints at the viewer; is she frustrated or merely tired? Informality and mystery characterises this drawing, attributed to Jacob Jordaens. It is one of five surviving drawings of the woman from the same sitting, suggesting that this was an exercise in capturing likeness. Yet the nature of her pose in this image tempts the viewer to identify some psychological manifestation of her personality.

‘The Encounter: Drawings from Leonardo to Rembrandt’ is a thoughtful show dealing with an under-appreciated area of portraiture. It presents a brief overview of the importance of observational drawing in the workshop and to an artist’s training, later facilitated by drawings of superb quality from a range of settings. However, a shortcoming of the exhibition is the forced grouping of works into unnecessary sections called ‘Personal Presence’ and ‘Capturing Likeness’. The works in the former are a demonstration of the artist’s handling of metalpoint and black chalk, incorporating female head studies by Pietro Perugino and Domenico Ghirlandaio; these would have been better located in the first half of the exhibition.

The drawings under ‘Capturing Likeness’ are some of the most naturalistic works in the exhibition, containing depictions of friends and courtly-looking figures, such as one attributed to François Clouet. These would probably have benefitted from a dismissal of the grouping of Carracci studio and Holbein the Younger drawings, allowing for a more general exploration of drawings of friends and those made in the court. When viewed outside of these topical constraints, the drawings in this exhibition really are outstanding demonstrations of an artist’s continual attempt to grasp human likeness and produce a representation that justifiably evokes both the sitter’s interior and external character.

For a review of the exhibition catalogue, click HERE.

‘The Encounter: Drawings from Leonardo to Rembrandt’ runs until 22 October 2017 at the National Portrait Gallery, London, http://www.npg.org.uk.

2 thoughts on “Encountering the Past”