A black, carbonised wooden table, found in the ruins of Herculaneum, a lion’s head carved into its leg. Hanging above it, a joyous fresco of lovers drinking, the cares of the world seeping away into the distance. Finally, filling the empty void of the display case, the plaster cast of a once-playful dog, arched as if scratching itself with its own rear paw – the collar around its neck still has traces of green pigment. These are only but a small fragment of deeply-moving exhibits exploring the daily life of Roman citizens in the British Museum’s latest blockbuster exhibition Life and death: Pompeii and Herculaneum. 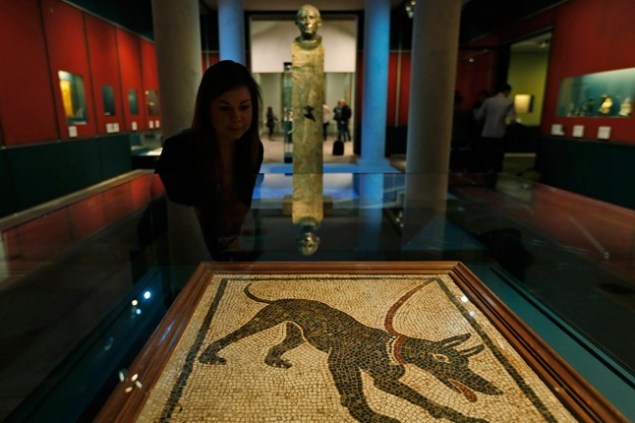 This incredible show takes its layout from the House of the Tragic Poet, a Pompeian villa known for its elaborate frescoes and mosaics scattered around its rooms – the owner, sadly, is still unknown. We enter the main part of the exhibition from a path evoking a Roman street, passing statues of the priestess Eumachia and the Empress Livia. A marble citizen list presents itself to us, recording not only the names of Roman citizens but also those of friedmen, or ex-slaves. A property divider, once inserted into a stone wall, reminds us that we are about to enter someone’s humble abode. But market stalls cover the entrance, and the displays make an attempt to reflect this.

Glass bottles containing garum, a kind of fermented fish sauce, place themselves beside fresh fruit and grains, now carbonised and extremely well preserved. You can just about hear the tinkering of a bronze wind chime, presented nearby, perhaps used to attract attention to the multitude of stalls that line the streets – its phallic form, associated with the god Priapus, was once a sign of good luck. Adorning these shop fronts were frescoes depicting everyday life – love scenes, drinking, gaming and even brawling – arranged almost like a modern-day comic strip.

Eventually, we enter the atrium, both the main public and private space of the house. A guard dog bends back in a mosaic, snapping at the countless visitors to the show. A herm with the portrait of the banker Lucius Caecilius Iucundus proudly stands behind it as if welcoming us to this glorious interior. To the left are a series of mosaics and frescoes depicting various family members – the equivalent of our family photos on a mantelpiece. A remarkably small mosaic depicts the portrait of a young woman. Each tile, or tessera, appears no larger than about 3mm, roughly a third of the width of the pearls she is seen wearing around her neck. A fresco at the other end of the wall depicts the baker Terentius Neo and his wife, who holds a stylus and writing tablet in contemplation. Literacy was often an indicator of one’s social status. As a result, this fresco signifies the couple’s equal status in business, home and Roman society. 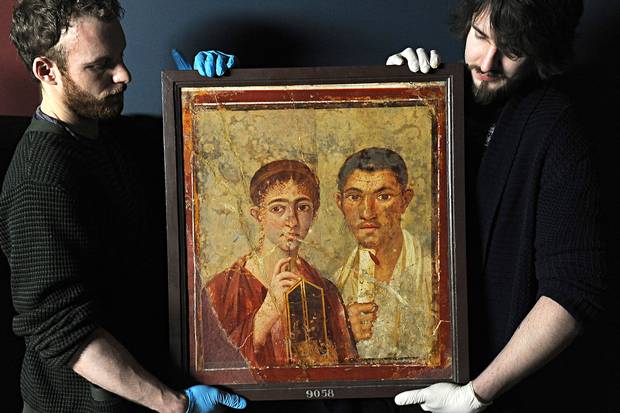 Terentius Neo and his wife. Image via www.standard.co.uk.

In the centre of the room, water is projected into an impluvium, a sunken part of the atrium where rainwater gathers into a shallow pool. Beside it is a one-legged marble display table, showing off a wonderful collection of silverware, another indicator of wealth and status. Above the handle of one of the silver vessels is a carving of a head. The support of the table is carved with the image of a panther, said to be the favourite animal of Bacchus, the god of wine and ecstasy.

On the other side of the room is a wooden strong box, reinforced with iron strips and panels that once contained family valuables – the predecessor to our current safe boxes. Despite its ordinary chest-like appearance, this box is meticulously decorated with bronze busts of the goddess Diana, a wild boar, and cupids flanking a satyr. Another storage chest disguises itself as our typical bedside table, its hinges made from animal bones. We start to gather a sense of the family’s need to publicly demonstrate their wealth, to show that they are superior to everyone else. But this all feels a bit too masculine, until we see the fragments of a loom – spindles, loom whorls and weights – that reassure us that women once worked in this room and lived in this house. However, a marble relief depicting an earthquake foreshadows the natural disaster that this family and the rest of Pompeii and Herculaneum will succumb to – even the miniature shrines and altars beside it can’t save them once that moment arrives.

Behind this wall lies the cubiculum or bedroom – there would have typically been several. As soon as we enter this room, we are immediately struck by the sight of probably the most heart-breaking and moving object in the entire exhibition: a baby’s cradle. Perfectly preserved, this wooden cradle measures just over a metre long with a curved base to allow for rocking – you are almost tempted to touch the sides of the object, rocking and shh-ing the baby to sleep. However, what truly breaks the heart is that the occupant of this cradle died during the eruption, covered with a woollen blanket.

Adorning the walls are several frescoes portraying intimate scenes of couples making love. Slaves often watched, though sometimes they also participated in the act. To the present-day individual, these may appear obscene, but to a Roman, they were merely symbols of fertility, sometimes superstition – a practise revisited underneath the lids of 15th century marriage chests, or cassoni. Other frescoes welcome the presence of the gods and goddesses of love, including a maenad and a satyr, both followers of Bacchus. A satyr-shaped oil lamp almost seems to say “I’m the lamp who knows all about your bed – do what you fancy – I won’t say a word.” 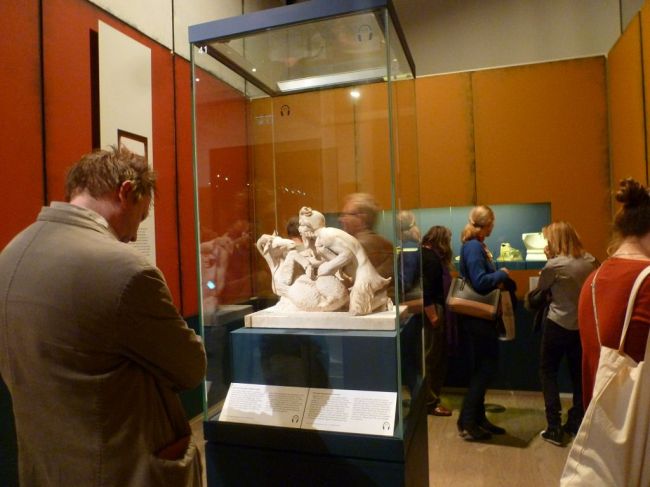 Other everyday objects find their way into the room: portable toilets, couch fragments, a linen chest still containing carbonised clothing, and washing bowls. Another fresco welcomes us, depicting a young woman styling her hair. She sits on a stool similar to the one exhibited beside it, and she holds a silver mirror, also on display amongst a multitude of other cosmetic and grooming products. Jewellery sparkles before our eyes, the pairs of earrings and signet rings evoking a modern dressing table.

Walking past the sheets of mica – a cheap alternative to glass – we find ourselves in the garden, or hortus. Two marble sculptures take centre-stage depicting stags being attacked by hunting dogs, reminiscent of the Diana and Actaeon story in Ovid’s Metamorphoses. A drunken Hercules laughs at its visitors on the left wall, watched over by a neighbouring satyr. The walls of the room partially resemble Greek colonnades, and a fresco of Flora, the goddess of fertility and abundance, frames herself inside an ornamented opening. Wall fragments retain their graffiti markings, recording the thoughts of those who wander into the garden for contemplation and rest. There were romantics, drunks, and simple slaves. There were even sexually-desperate men – “We came here horny and now we really want to go, but that girl holds us back” – funny, since a marble statue nearby depicts the god Pan thrusting upon a nanny goat. Images of gladiators – the celebrities of the time – were also carved into the walls, resembling our everyday posters. 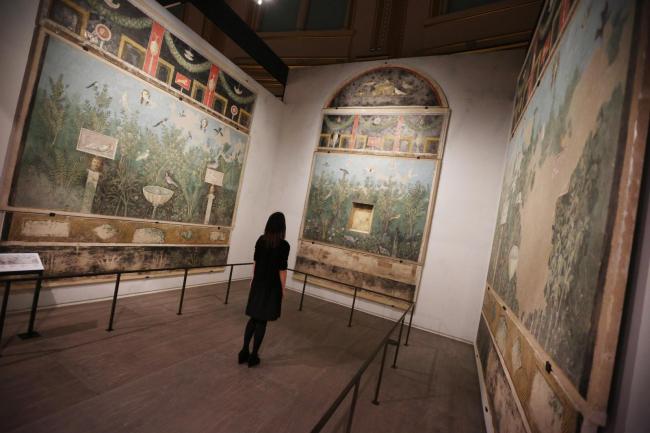 The significance of water has particular emphasis in this room, since the fountains and cisterns exhibited were only possible due to the introduction of the piped water system via the aqueduct. But this is also where the true gem of the show resides. Taken directly from the House of the Golden Bracelet in Pompeii is a four-walled garden fresco, decorated with birds of various species and countless types of greenery. The room it occupied would have overlooked the garden, blurring the boundaries between the inside and the outside world. Fountains are flanked by busts, and panels depict reclining nudes. The upper section looks almost like a balcony, complete with benches and wine jugs – Bacchus is clearly still at work here.

Back indoors, the living room welcomes us with another set of frescoes, demonstrating the four Pompeian fresco styles, from the First to the Fourth – the latter provided the foundations for the Classical tradition. We begin to see the origins of perspective and trompe-l’oeil painting, terms that weren’t coined until the 15th and 17th century respectively. This room was supposed to be the largest and finest in the entire house, so a great deal of effort was taken to ensure it was decorated with the latest architectural styles, frescoes, mosaics and marble reliefs – roof fragments are also shown here. This room would have also housed a dining area known as the triclinium, so various sets of cutlery and crockery are exhibited here, including a gorgeous cameo wine jug. One mosaic features an assortment of sea life with a cheeky kingfisher eagerly waiting for its next catch. But the Romans were also well aware of the inevitability of death, suggested by a skeleton mosaic that once decorated the dining area. 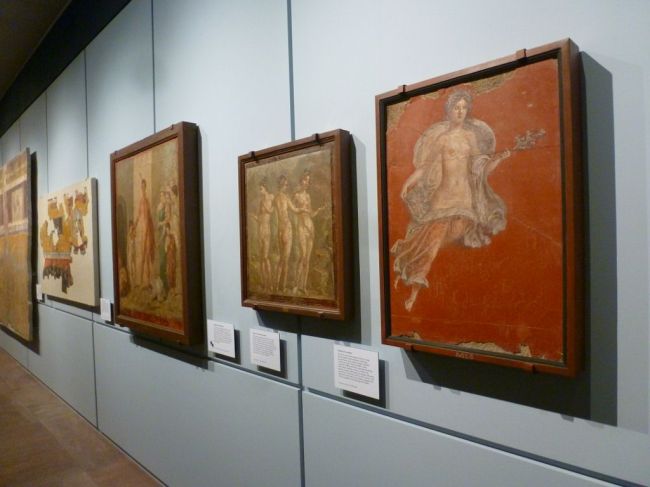 Food-related frescoes also adorned the kitchen but the main attraction is the painted shrine that was used to pray for the safety of the family – did you know this was also the slave’s quarters? Kitchen utensils and carbonised foodstuffs are obviously exhibited, followed by the presence of a toilet. However, a cabinet presents us with broken fragments of pottery and glass found in the drains of Herculaneum, including a terracotta statue dubbed ‘the Lady of the Drain.’

Unfortunately for this family – and the rest of Pompeii and Herculaneum – the household gods were not on their side, regardless of how many shrines they had. Mount Vesuvius erupted in AD 79 creating a pyroclastic surge that buried the two cities, vaporising their inhabitants in the process and preserving everything else. A short video in the next section helps explain this phenomenon. Alongside it are the discovered possessions of escaping victims – money boxes, lamps, golden jewellery, good luck charms, weapons, and even medical instruments. Looking at these objects, we really get a sense of what was perceived as valuable or necessary for survival – remember, these objects would have been rashly chosen during such an emergency, and it was interesting to see that food and water wasn’t on the list. 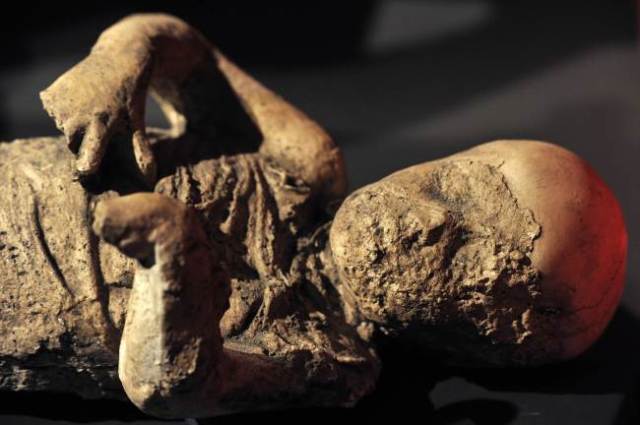 At last we reach the highlight of the show: six horrific corpses frozen in time, suspended in a state of panic and urgency – a truly brilliant conclusion to the exhibition. One particular corpse stands out from the rest, known as the ‘Resin lady’, where the void left by her body was naturally filled with clear epoxy resin, whereas the others were artificially filled with plaster – parts of her skeleton can still be distinguished. These corpses represent only a small portion of roughly 1,500 found bodies between the two cities, expressing fear, anguish and a desperate longing for hope of survival.

This is a must-see exhibition of unrivalled quality, both in its curation and extraordinary loans. The concept is very simple – what better to explore daily life than to venture through one’s house? – and the information provided is particularly detailed. I was definitely struck by the heaviness of sexual content on display, and on the most unexpected objects too, from frescoes to wind chimes to oil lamps. This is an incredible opportunity for visitors to the museum to see a set of exhibits entirely different from the museum’s own Roman collection, put into a straightforward, easily relatable form, as well as a chance to come face to face with the citizens themselves. Roman history doesn’t get any closer than this…literally. 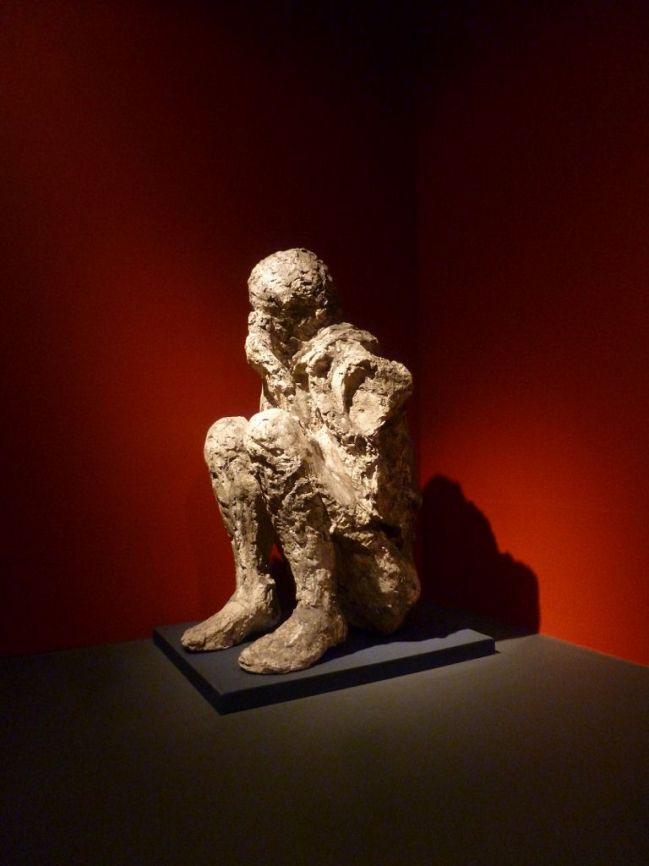 Life and death: Pompeii and Herculaneum runs until 29th September 2013 at the British Museum, London, www.britishmuseum.org.