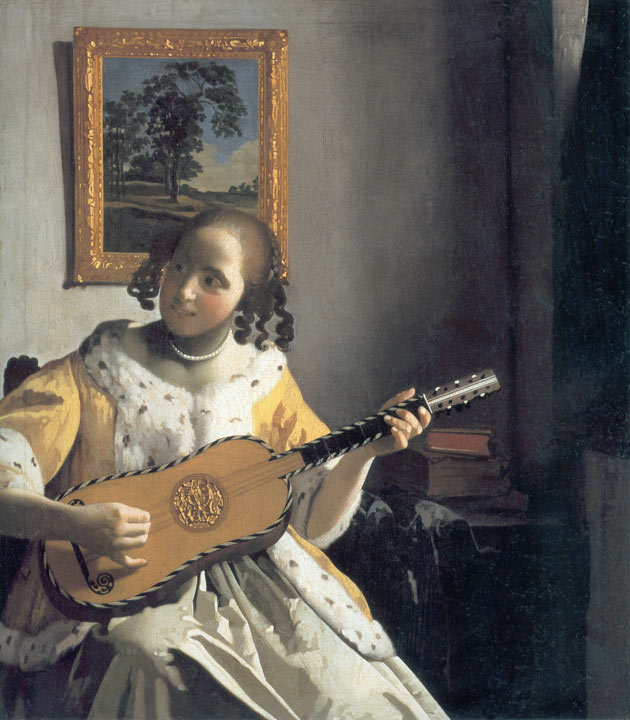 I assume many of us are familiar with Johannes Vermeer’s painterly masterpiece entitled Girl with a Pearl Earring (c. 1665), on display at the Royal Picture Gallery Mauritshius in The Hague, the Netherlands. Well, unfortunately, the National Gallery’s latest exhibition doesn’t have anything to do with this painting, but it draws on a theme that is not untypical of society today. 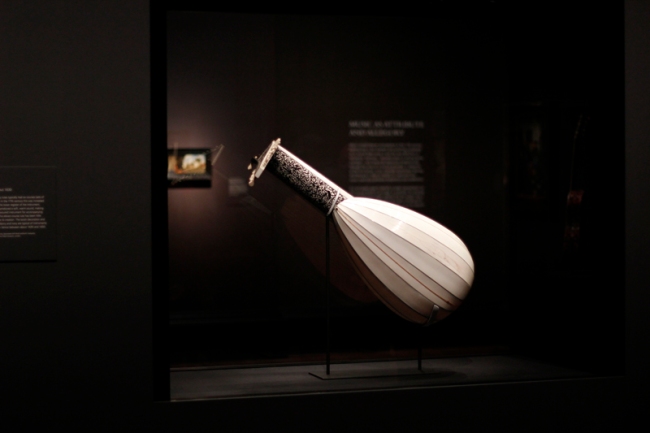 Vermeer and Music: The Art of Love and Leisure makes an attempt to explain music’s role in Dutch society, using Vermeer’s paintings as a kind of starting point. Unfortunately, the artist’s prominence in the exhibition isn’t particularly significant. The majority of the exhibited works are by other Dutch painters from the same period.

The exhibition is split into five rooms. Accompanying three of the rooms are instruments from the Baroque period. They essentially act as a material comparison to their painted counterparts, allowing us to fully appreciate the instruments as works of craftsmanship in their own right.

The opening room approaches the theme of music quite generally: as an attribute and allegory. Many objects in the history of art have had some symbolic meanings associated with them, the most obvious examples are those found in paintings of saints. Music has certainly had its own set of connotations, both positive and negative. For some, it was a gift from the gods; for others it was a gateway for sin’s entry. For the Netherlandish, music was a frequent symbol for harmony, a theme that runs through the paintings in the next room.

The works in this first room take the lute as a point of reference, one that can be seen on display close by. Several of these paintings are vanitas images, such as Harmen Steenwyck’s Still Life: An Allegory of the Vanities of Human Life (about 1640). Temporal concerns such as knowledge, power and wealth are symbolised by costly objects – books, sword, seashell – while the lute and recorder allude to earthly pleasures. But the prominence of a skull in the painting served as a reminder about the transience of human life, as well as the transience of a piece of music. This same transience is being pondered upon by a very pensive gentleman in the nearby A View of Delft, with a Musical Instrument Seller’s Stall (1652) by Carel Fabritius. 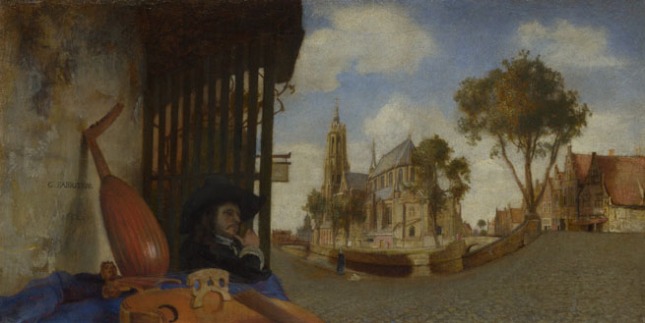 Carel Fabritius, A View of Delft, with a Musical Instrument Seller’s Stall, 1652. Image via www.nationalgallery.org.uk.

Musical ensembles feature in the following room, bringing into play the harmonious nature of music. Group performances were commonplace in Dutch society – at home, on the streets, or at the local taverns – as a means of socialising. Musical harmony was representative of political and social harmony within society. The instruments presented in this room are a cittern and a violin, complete with a lovely Baroque bow. The cittern is particularly worthy of appreciation since a beautiful African boy’s head has been intricately carved into the top of the pegbox. Even the generally bland-looking sound hole is ornamented with flowery designs. Jacob van Velsen’s A Musical Party (1631) shows us a typical family dinner scene accompanied by two singers and a violinist. Family members and friends spectate from their seats while a man smokes to the left of the painting. But what is one to make of the concentrated gaze between the female singer and the violinist? The third room provides us with a solution.

Back in the days, musical ability was seen as a desirable attribute amongst young couples – and it still is to this day. Men, sometimes women, would serenade their significant other. Sometimes they would play a duet together, which in Dutch society was seen as a prelude to an intimate relationship. Songbooks, several of which are exhibited in a display case, were given as gifts between couples – much simpler than the hassle we face nowadays. Gabriel Metsu’s A Man and a Woman seated by a Virginal (about 1665) is a wonderful visual exchange between a woman and a man. No music is played, but the rhythmic handing-over of a sheet of music while the man tips his glass in her direction makes it almost visually musical. A slightly more familiar scene is depicted by Jan Steen in Two Men and a Young Woman making Music on a Terrace (1670-5), where a lute-player accompanies a rather unlikely couple, one of whom is reading from a songbook while the other holds a glass of wine, looking slightly drunk – very romantic, indeed.

So far, no Vermeers have made an appearance and this is because the National Gallery decided to save the best till last. Five paintings by the Dutch artist – out of a total of 34-6 known Vermeers worldwide – accompany two gorgeous virginals, a rather exotic-looking guitar, and a division viol. The polished underside of the lute from the first room can also be seen. The feature piece for the exhibition is The Guitar Player (about 1672), where a woman appears to be playing for a guest outside of the frame, but she isn’t playing for us either. This room focuses on Vermeer’s depictions of primarily solo female musicians. Traditionally, the pleasant, calming timbre of stringed instruments made them seem appropriate for female musicians. Virginals feature in the other four paintings, but The Music Lesson (about 1662-3) spoke to me the most. 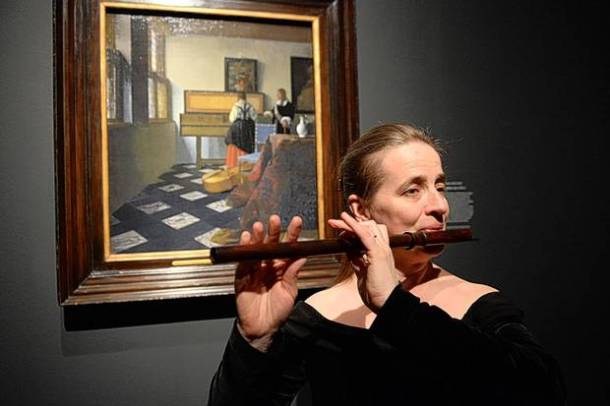 Johannes Vermeer, The Music Lesson, about 1662-3. Image via www.standard.co.uk.

To begin with, a lovely inscription on the virginal reads ‘Music is the companion of joy, the medicine of sorrow’, referring to music’s capacity to alter moods. But these curative properties are also reserved for love, hinted by the woman’s slight turn of the head, as if exchanging glances with the man on the side. In the mid-ground, a viola da gamba sits on the floor, either inviting the viewer to join in or for the man to start a harmonic duet. One of the exhibited virginals also bears an inscription: ‘music, the sweet solace of labour.’

However, Vermeer was also known for being simple in his compositions. Young Woman seated at a Virginal (about 1670-72) is a small, uncomplicated painting depicting exactly what the title suggests. But the beauty of this image is also the artist’s use of lighting. The soft light that warmly touches his subjects – which run across many of his paintings – heighten the sense of intimacy of the scene. More details are discerned with each passing glance: a shimmer of pearls catch our attention in her hair, the corner of a page from the sheet music, and the polished surface of the virginal itself. 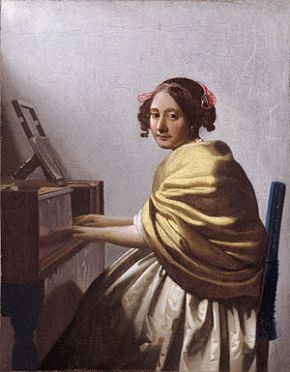 Johannes Vermeer, Young Woman seated at a Virginal, about 1670-72. Image via www.wikipedia.org. 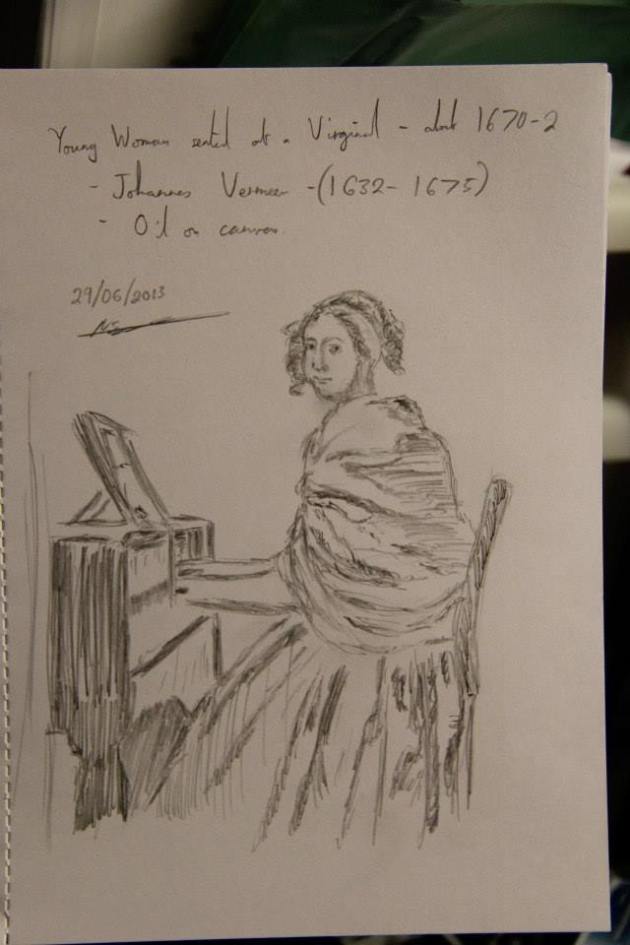 My version. Own photograph.

Concluding the exhibition is a room dedicated to the technical analysis of the Vermeer paintings, which I found rather pointless unless visitors were made aware of the Han van Meegeren scandal – an art forger who faked countless Vermeer paintings. Nevertheless, some of the information was quite interesting, allowing us to venture into Vermeer’s working methods, such as his frequent use of ultramarine. There is also apparently a fingerprint at the top of The Guitar Player.

This exhibition is quite lovely and the inclusion of the respective instruments allows for a slightly different dimension of understanding. Probably the most useful inclusion to the show was the Royal Academy of Ancient Music’s live performances of Baroque repertoire every Thursday, Friday and Saturday. Not only can we visually engage with the paintings but the performances give us a sense of the kind of vibe we would expect from the characters in the exhibited works.

However, there is a catch to this show: most of the paintings in this exhibition are from the National Gallery’s own collection. Only four of the total 25 exhibited works are from other collections, three of which are the Vermeers. It would seem that the only incentive to visit this show is to see those three Vermeers amongst the other two National Gallery-owned ones, as well as the live music and the 17th century instruments. For many, this would be the make-or-break section of their decision, whilst juggling the £7 admission fee.

Is it really worth the straight-forward narrative, the minimal extra displays, and the live music? I’m tempted to say no, but at the same time it seems like the better option than to buy flights to New York and Brussels to see a Vermeer and a muselar virginal – and you can’t even see that particular Vermeer since it’s in a private collection. 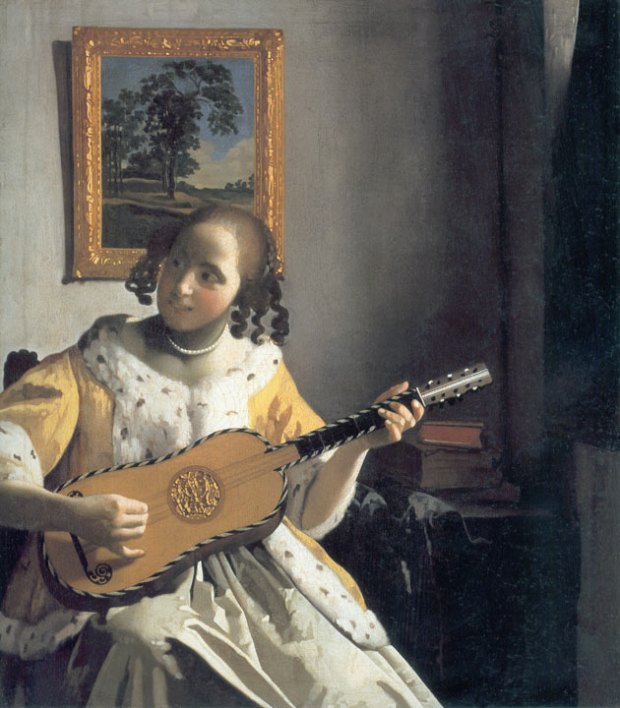 Johannes Vermeer, The Music Player, about 1672. Image via www.guardian.co.uk. 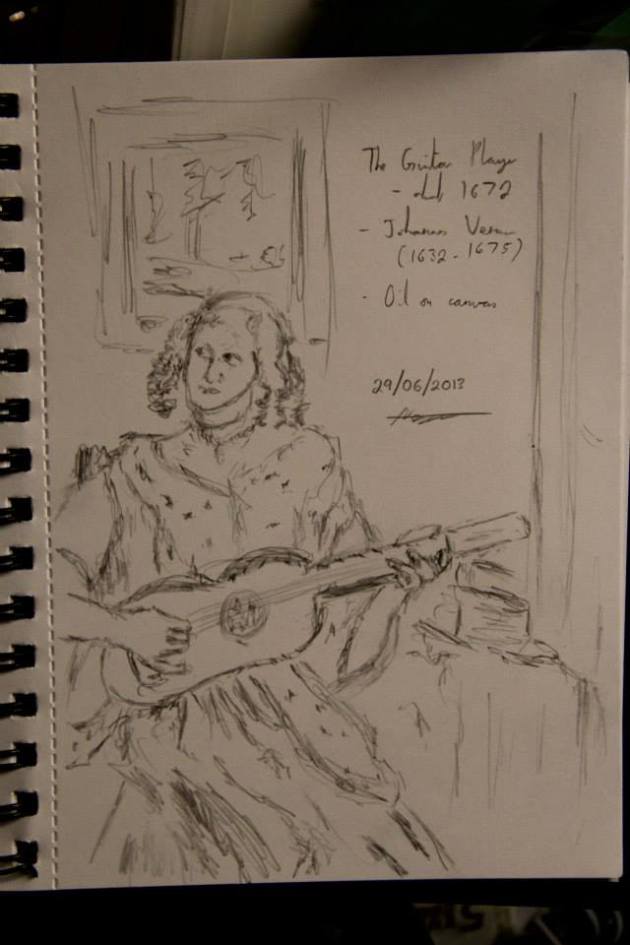 My version. Own photograph.

Vermeer and Music: The Art of Love and Leisure runs until 8th September 2013 at the National Gallery, London, www.nationalgallery.org.uk.