That’s right. Two very inter-related paintings, set apart by three centuries, have finally been exhibited side by side for the first time in the Palazzo Ducale’s latest Manet exhibition in Venice. The exhibition, entitled Manet: Return to Venice, is an attempt at surveying the cultural models that inspired the artist during the course of his career, one of which was undoubtedly the Venetian-born Titian. 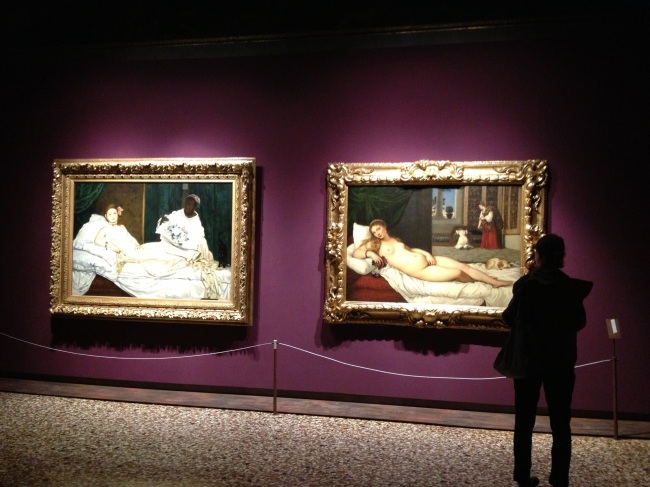 A total of ten rooms divide the exhibition into nine distinct themes, each acting almost as a mini exhibition of its own. The theme of influences certainly runs through the entire show, but it does feel fragmented at times.

The prime stars of the show steal the limelight quite early in the exhibition, specifically the 3rd room. Thanks to the Musée d’Orsay’s collaboration with the Venice Civic Museums Foundation, Olympia (1863) finally leaves France for the first time ever, partaking in the once-in-a-lifetime opportunity to exhibit next to the Uffizi’s Venus of Urbino (1538) – an occasion not to be missed. Both paintings are rich in art historical references, their content full of symbolic meanings. They stirred a great deal of controversy in their own time, and both are excellent examples of the art of their respective periods. But even better, the work that sparked this historic chain of reclining Venus’ was painted by yet another Venetian, Giorgione’s Sleeping Venus (c. 1510). This chain reaches even to the present day with works such as Richard Hamilton’s Balzac (a) + (b) + (c) (2011), exhibited last year at the National Gallery in London.

Manet’s influences included the well-known Tintoretto – whose works can be seen at the Gallerie dell’Accademia and the Scuola Grande di San Rocco – basing one of his self-portraits after the Venetian artist. Le Dejeuner sur l’herbe (c. 1863) features opposite this portrait, but unfortunately it is not the Musée d’Orsay’s original, rather the Courtauld Gallery’s later copy – the same one that was exhibited in the Royal Academy’s recent Manet: Portraying Life exhibition. I’m still trying to get my head around the failure to loan the original, despite the collaboration.

Various still-life paintings occupy another room, depicting lemons, peonies and asparagus, to name a few. These everyday objects are found scattered numerously in the artist’s usual genre paintings – a bouquet of flowers features in Olympia, as well as a deceptively hidden black cat. Flanking the doorway into the next room are two religious sacred scenes, permanently hung in the Stucco Room, introducing us to the next theme: Manet’s paintings of Christ. 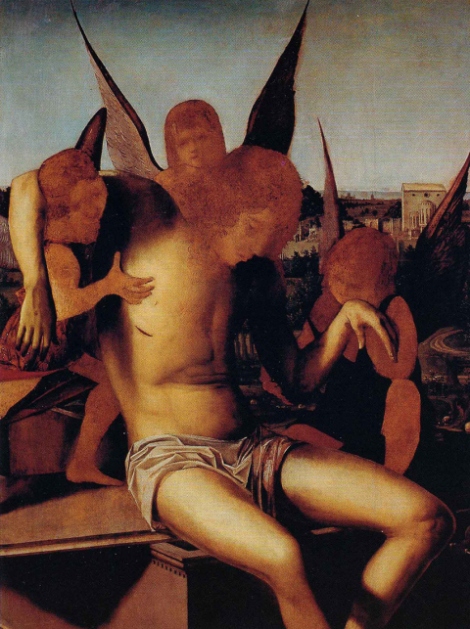 Looking to the Italian masters for inspiration, the artist copied from one of Andrea del Sarto’s frescoes in the Santissima Annunziata Basilica in Florence, appropriating it into a watercolour of a dead Christ carried by angels, evoking Antonello da Messina’s Dead Christ Supported by Three Angels (1475) shown beside it. A slightly more modern approach to Christ’s humiliation appears in Jesus Mocked by Soldiers (1864), where Christ sits with his hands tied, interrogated by a man dressed in a modern fashion while two other men stare aimlessly: one towards Christ and the other towards the viewer.

However, for an exhibition entitled Return to Venice, Manet’s somewhat Spanish works are also exhibited. He took inspiration from Goya, Velázquez and El Greco, many of which he would have had the chance to see at the Musée du Louvre. But the resulting paintings aren’t entirely of Spanish influence. Instead, Manet incorporated styles from the Italian Renaissance and Baroque, fusing them with contemporary themes and fashions, topped with a Spanish flavour – primarily his Spanish subjects, such as his portrait of Lola de Valence. Probably one of the loveliest works in this room is The Fifer (1866), a portrait of a young boy playing a flute of sorts, sharply dressed in the uniform of the band of the Imperial Guard in Spain. 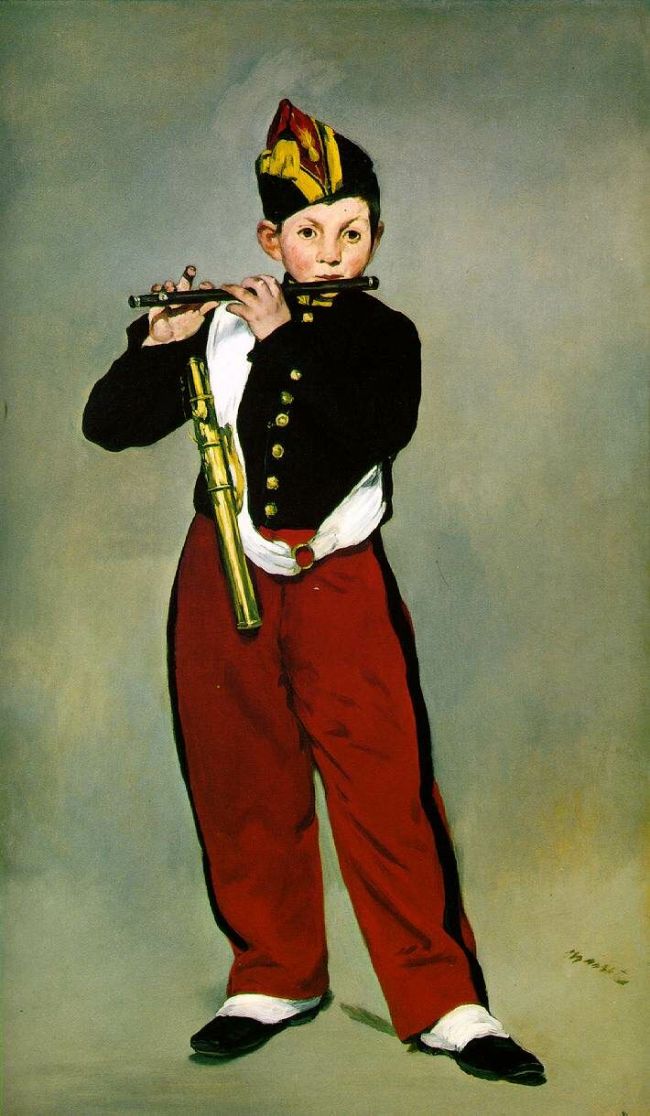 The following rooms relate to Manet’s relationship with culture and society at the time, very much like the aim of the Royal Academy’s exhibition. In fact, several portraits exhibited in that show are displayed here. There is his Portrait of Émile Zola (1868), Portrait of Stéphane Mallarmé (1876), and even the Portrait of Georges Clemenceau (1879-80). One of the rooms focuses on his depictions of music and theatre, such as The Balcony (1868-9), who characters eerily express similar expressions to the accompanying Two Venetian Ladies (c. 1495) by Vittore Carpaccio. But I was particularly glad to see, for the second time, Berthe Morisot with a Bouquet of Violets (1872) in the next room – the intensity of the artist’s use of black is still quite overwhelming.

The final room is a reminder of the artist’s visit to Venice, appropriately labelled ‘The Boundless Sea’. The paintings exhibited here solely focus on the Venetian canals and the sea. Mooring poles decorated with brightly coloured swirls captivate the viewer’s eyes in The Grand Canal, Venice (1874), while the front of a gondola subtly intrudes at the bottom-left corner. The works in this room are small, but they are beautiful in their expressive power, almost evoking the actual waves that crash through the city’s canals a few steps away.

The Palazzo Ducale. Own photograph.

This is a wonderful little exhibition and it’s definitely worth going to. Even if you are not a fan of Manet, the fact that both Olympia and the Venus of Urbino are displayed side-by-side for the first time is incentive enough to take a visit. The collections displayed are truly wonderful and definitely support the aim of the exhibition to trace Manet’s cultural influences. However, the layout of the sections is rather disorganised. I found that some of the themes – ‘North/South (Still-life)’; ‘Manet: Society Painter’; ‘The Boundless Sea’ – were awkwardly interjected into an otherwise, nicely flowing exhibition. Overall, check it out if you’re in Venice this opening summer. If you have plans to see the Biennale, make sure those plans don’t ruin your chances of seeing this once-in-a-lifetime display.

Titian’s VS my Venus of Urbino. Image via www.uffizi.org (top); own photograph (bottom).

One thought on “‘Olympia’ and the ‘Venus of Urbino’ in the same show?”