Featured in Subversive Press and InQuire.

For those of you who didn’t know, the University of Kent has a Print Collecting and Curating module specifically for final-year History & Philosophy of Art undergraduate students. The programme, currently in its 5th year, provides its students with an opportunity to organise and set up their own exhibition. They are given a budget of £3,500 which they will have to use to purchase and loan works of art from various print collections across the UK. Led by the art historian, lecturer and Studio 3 Gallery curator Ben Thomas, the programme is a unique hands-on introduction to the art world and its market. This year, the resulting exhibition focuses on a very popular subject amongst the general public: celebrities.

Two-Faced Fame: Celebrity in Print 1962-2013 explores the withering status of the celebrity icon. Many of the prints in this exhibition are by British contemporary artists whose prints focus on celebrity pop culture. Among their influences is the Pop artist Andy Warhol, who famously stated that “In the future, everyone will be famous for 15 minutes.” With Youtube celebrities on the increase, it would be very difficult to prove him wrong. Nowadays, anyone can be a ‘celebrity’. Post a video of yourself doing just about anything and you could be the ‘next big thing’. This deterioration of the celebrity status is where Two-Faced Fame begins its artistic journey. 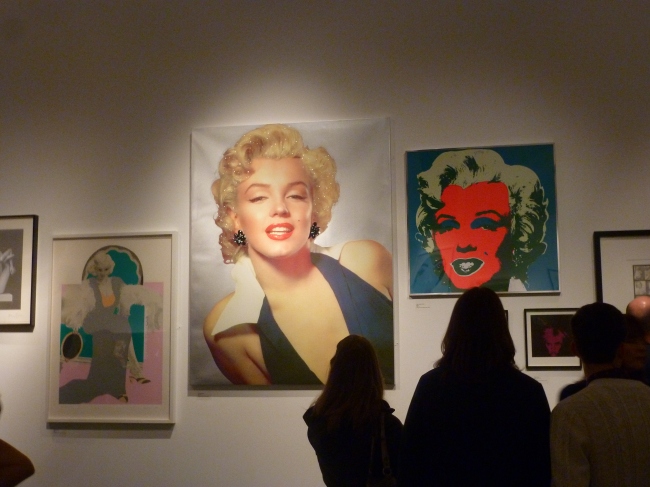 Brushed up against the walls of the Studio 3 Gallery are images of recognisable celebrity icons. Andy Warhol is introduced to us through Gavin Turk’s Fright Wig (2011) series, while Banksy gives us Kate Moss in the guise of the neighbouring Marilyn Monroe (1962) screenprint. David Bowie makes an appearance with Debbie Harry, both of which flank a peeping Michael Jackson screenprint by Gary Hume. Amy Winehouse featuring in the nearby Belshazzar’s Feast (2010) by Gerald Laing, while a proud George Bush stares righteously into the distance, constructed out of pornographic images. However, the limelight is stolen from the other celebrities by yet another Marilyn Monroe; that of Peter Blake’s MM Silver (2012) who dazzles elegantly above her visitors, indulging in the fame that she used to know.

But as the title suggests, there are two faces in the world of fame: that of being an iconic figure, and that of being turned into a mass-produced commodity. One of the exhibited works is a mirror, entitled Your Authorised Reflection (2009). In the bottom right-hand corner is Gavin Turk’s signature. By looking into the mirror, our reflection instantly becomes part of the artwork. Our status becomes temporarily elevated as a result of the artist’s branding on the mirror, hinting at Marcel Duchamp’s Fountain of 1917. Hanging on the outside of the gallery is GSG’s The Great Leveller (2013), a montage of celebrity and civilian mugshots. Both social statuses are in line with each other. Fame is now a level playing field. They are now equals within society, being no better, nor worse than one another.

Overall, this year’s students have presented us with a wonderfully exciting exhibition that appeals to the wider community in a way that many of us can relate. The works on loan are eye-catching, vivid and in several cases, psychologically engaging. Some are even comedic, as was the case with Peter Blake’s R.A. Students Art. But most importantly of all, they show how celebrity culture is addressed in modern art, as well as in modern-day society. Fame elevates us to the point of recognition, but it also dehumanises us, turning us into a product of everyday living.