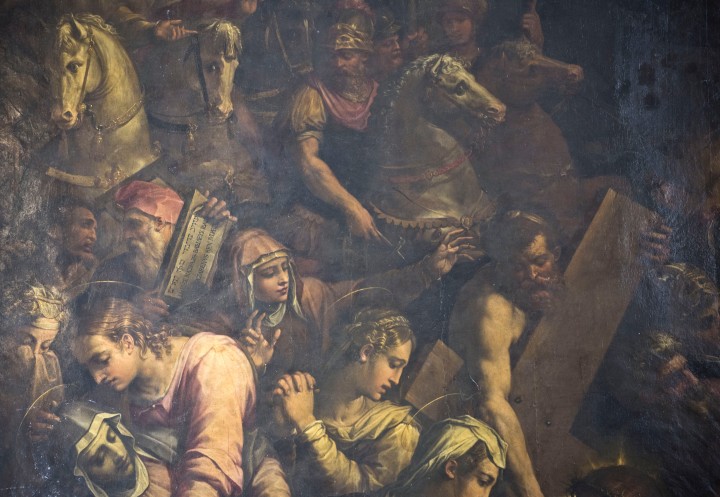 The Opera di Santa Croce, the non-profit body in charge of the church and monumental complex’s upkeep since 1371, is currently raising €100,000 ($119,000) to fund a hugely important project to clean and restore the tomb complex of Michelangelo and the Buonarroti family.

It is urgently in need of restoration following damage caused by the 1966 Great Flood of Florence in which millions of rare books and works of art were damaged or destroyed.

They hope to collect the funds by 30 October 2017. Work is expected to begin immediately, aiming to finish by March 2018 in time for Michelangelo’s birth date (6 March).

‘[…] after all the previously described ceremonies, the duke [Cosimo I de’ Medici] ordered that Michelangelo be given an honoured place in Santa Croce for his tomb, the church in which, when he was alive, he had decided to be buried, in order to be near the tombs of his ancestors.’

The tomb of Michelangelo in the Basilica di Santa Croce, Florence, is the church’s most famous destination for visitors from all over the world, including myself. It was designed by Giorgio Vasari and finished by 1570, upon the request of Michelangelo’s nephew, Lionardo Buonarroti, with the help of Duke Cosimo I de’ Medici. The sculptures on the tomb were created collaboratively by the Florentine sculptors Giovanni Bandini, Valerio Cioli, and Battista Lorenzi del Cavaliere. The frescoed areas were painted by Giambattista Naldini. 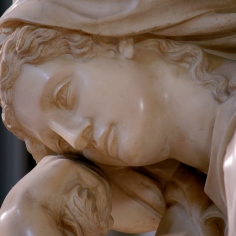 However, his body was not originally placed here. Michelangelo died in Rome on 18 February 1564. A grand public funeral was held in Rome and his body laid in a tomb in the church of Santi Apostoli. This was unacceptable for the Florentines, including Lionardo and Cosimo I, and so a ploy was devised to steal his body back. His body was secretly shipped back to Florence ‘like merchandise in a bale’, residing briefly in the now-demolished church of San Pier Maggiore on 10 March. Another ceremony was held the following day before his body was finally carried to Santa Croce and then soon laid to rest in the current tomb.

To the left of this impressive monument is the Buonarotti family altar, often overlooked by visitors, and containing over 66 members of the Buonarotti family. The altarpiece, painted by Vasari of Christ Meeting Veronica on the Way to Calvary, was commissioned by Cosimo I between 1566 and 1588. Within this busy painting is a newly-discovered portrait of Michelangelo. The surface of the painting has been covered in centuries of grime and yellowed varnish, obscuring the original colours and details of Vasari’s dramatic scene.

You can support the project by going to their website below where more information can be found:

Donations of any amount are welcome!