An artist sits in a wheelchair, a large pair of scissors in one hand, the other holding on to a large sheet of orange paper. Aided by his studio assistant, the Russian-born Lydia Delectorskaya, the great Henri Matisse swiftly and rapidly cuts the piece of paper into a wavy, algae-like form. Similar shapes are then pinned to a large wall. Sitting in his wheelchair, the artist contemplates the collage of shapes that adorns one of several walls.

This is one of those rare times when footage of artists at work exist for the public to see – and it’s perhaps one of the most beautiful, too. Filmed by Adrien Maeght, son of the French art dealer Aimé Maeght, it is a revelation into the artist’s thought processes, despite being confined to his wheelchair due to his declining health in the early 1940s, including being diagnosed with cancer. This film serves as the opening to Tate Modern’s latest blockbuster exhibition Henri Matisse: The Cut-Outs which explores the artist’s adoption of this unconventional medium during his final years. 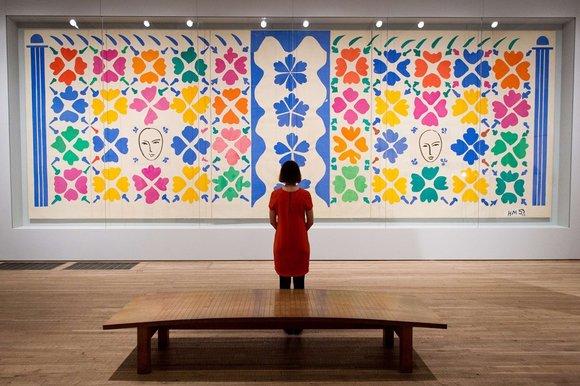 Matisse originally used his cut-outs to brainstorm and compose his paintings, evidenced in the first room where we see his painted Still Life with Shell (1940) next to the cut-out version. At this early stage he would draw the details of the objects on to the cut outlines of the gouache-painted paper. In the next room we see a small 1938 cut-out version of his two famous Dance (1909-10) paintings in the Hermitage and MoMA in St. Petersburg and New York, respectively. He was deeply fascinated by dance throughout his career and it was around this time when the artist began designing the scenery and costumes to Léonide Massine’s ballet, set to the music of Dmitri Shostakovich’s Symphony #1. Symbolic meanings were then attached to the five colours associated with the symphony: white (man and woman), yellow (wickedness), blue (nature), red (materialism) and black (violence).

In 1947 the publisher Tériade published Jazz, a limited edition artist’s book based on Matisse’s cut-outs made between 1943 and 1946. To the audience’s delight – and certainly to mine – a complete printed folded set is unfolded across the side of the room, displayed with the original 20 maquettes or cut-outs for comparison, comprising of scenes from the circus or theatre, such as The Horse, the Rider and the Clown, Icarus, and The Knife Thrower. Matisse felt that the printed cut-outs lost their sensitivity and it is understandable why. Being in essence a form of collage, the layering of each sheet of paper creates texture, visually recognised in the form of small contrasts between overlapping layers. The act of printing removes this unique texture, rendering the cut-outs as perfect two-dimensional images and no longer collages, thus removing their sensitivity which is registered by one’s touch.

The artist’s adoption of algae-like forms was inspired by a visit to Tahiti in 1930 where he found “intense pleasure in contemplating the submarine world.” This manifested in his Oceania, the Sky (1946) and Oceania, the Sea (1946) screenprints which consisted of cut-out designs of birds, leaves, coral and fish. The starting point for these was from a cut-out swallow Matisse had pinned to a wall of his apartment to cover up a stain. Over the following weeks, many more shapes were stuck to the same wall.

Perhaps one of the gems in this exhibition is a partial reconstruction of a wall in Matisse’s studio and home in Villa le Rêve in Vence, a hilltop town in Southern France overlooking the Mediterranean Sea. The original wall featured an abundance of cut-out plant forms which were pinned on to its surface, allowing him flexibility as he tried new compositions. He originally conceived the group as a single composition, even having been approached by a ship builder to buy the entire studio wall and have it mounted under glass. Matisse refused the offer and the cut-outs were framed individually, resulting in the display we see in the exhibition. 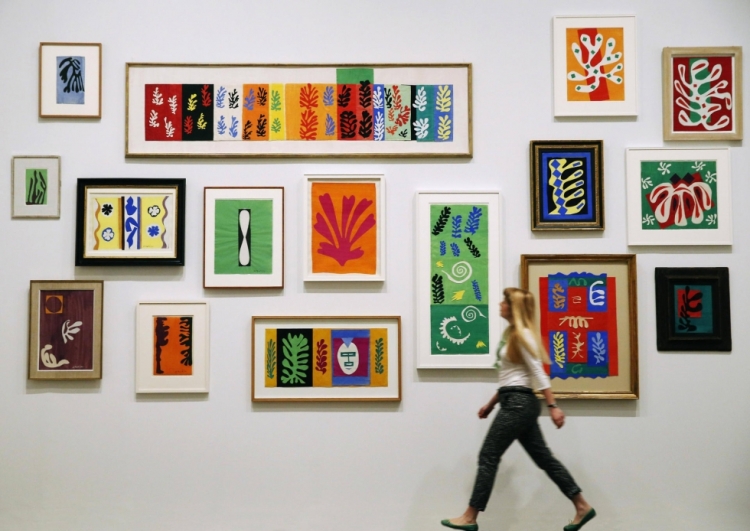 In the same town Matisse made designs for the Dominican Chapel of the Rosary in 1947 after being approached by a nun who nursed him four years earlier. He designed several stained-glass windows – the drawings of which are on display – and even took to reinventing the chasuble robes worn by the priest which had predominant displays of crosses throughout their design. Some even featured Matisse’s plant forms.

The side windows of the chapel were particularly mesmerising. Known as The Bees (1948) they were a vivid display of geometric shapes composed like the stills of a film. The bees themselves, highlighted as black and white squares, are in the process of flying from one end of the church to the other, though personally they resemble flies rather than fluttering yellow bees looking for pollen.

Matisse’s stained-glass designs didn’t stop there. Revolving around a Christmas theme, he was commissioned in January 1952 to make Christmas Eve (1952) for the Time-Life Building in New York, shown in conjunction with the original maquette. This is the first time either of these pieces have been shown in the UK, both of which have been in the collection of the Museum of Modern Art, New York, since 1953. Glass samples of the window are shown in an earlier room alongside the tracings of the window made to measure the individual sections.

Shown in a darkened room, the window still evokes the same feeling one gets in a cathedral or any other place of worship. There is a strange devotional atmosphere alike those in the chapel in Vence, yet there is no direct association with religion in its subject matter other than the stars which shine above the plant-life beside a river. As I observed the raised heads around me, I was suddenly reminded of carol singers eager to welcome in Christmas, and of little children looking outside their window in the hopes of seeing Santa Claus and his troupe of reindeer.

The exhibition also brought together all four of Matisse’s Blue Nudes, made in the spring of 1952. Despite being numbered from one to four, Blue Nude IV (1952) was actually the first to be made – yet last to be completed – and is the only one in the series that is not cut from a single sheet of paper. One can clearly see the arched charcoal lines that he drew to establish the form of his figure. After this initial struggle, the others took him only ten minutes to finish individually. As I circled the room containing these iconic pieces, I noticed Matisse’s improved use of negative space as a substitute for the marked line, especially in the definition of the torso. The pose of these nudes are also very close to his Pink Nude (1935) painted nearly two decades earlier, and the subject is one that runs through the entire course of his career.

As Matisse’s grasp of this new medium improved, so too did the size of his compositions. The Parakeet and the Mermaid (1952) represents one of his largest cut-outs, amongst others such as his Creole Dancer (1950) and Large Decoration with Masks (1953). Each of these are incredibly vibrant, with blue being the predominant colour against eclectic displays of yellow, orange, pink and green. I found the latter particularly apt in a bathroom setting due to its symmetrical nature and consciously chosen white background.

This exhibition is a very solid overview of Matisse’s late career as a wheelchair-bound artist exploring the capabilities of a technique that was otherwise preparatory in his process of art-making. It brings together an outstanding collection of his cut-outs, from complete sets of Jazz (1947), the reunion of his Blue Nudes, to a reference sheet created by Matisse to record every hue and colour present in these highly decorative new works. Though the show is 14 rooms long, you’ll come out wishing you’d never stepped through the exit doors and into the gift shop.