I recently attended a concert at the Water Rats in London headlined by UK country-duo The Shires. This was the penultimate leg of their UK tour. Supporting them on tour was Jersey-based Frankie Davies. To my surprise, Gary Quinn from Ireland was also performing at that particular concert.

It was fun-filled night of promoting British country music and sharing one’s stories through deep and powerful songs. Having previously met Frankie before, I also had a chance to meet The Shires – consisting of Crissie Rhodes and Ben Earle – and Gary Quinn as well. I met her photographer cousin, Mel, who owns Mel Brown Studios, and I also met Jennifer, tour manager for The Shires. 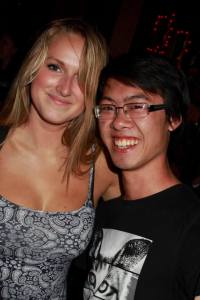 I had a chance to experiment with my own photography – see HERE – and I managed to do it while juggling a glass of white wine in the other hand – there’s an eyewitness.

Anyway, I managed to have my review published on ukCOUNTRYmusic.NET, the UK’s main (fan) website dedicated to promoting American and British country music, a hub for country fans everywhere to gather together and join in with the new wave that is changing the British music scene as we speak.

Click HERE to read my review of the concert.