The Sorbonne. This fascinating domed structure used to house the former University of Paris. Nowadays, it is the home of the Panthéon-Sorbonne University, one of 13 different universities that succeeded the University of Paris in 1970. And it was here, in the Place de la Sorbonne, where my day began. 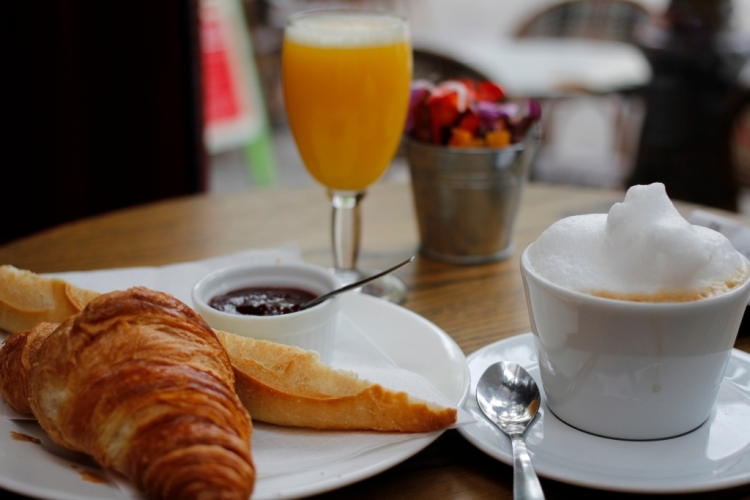 Aiming to visit the photograffeur JR’s installation in the Panthéon, I decided to buy some time and have breakfast at Les Patios in the Place de la Sorbonne. For €7.50 I was treated to a glass of orange juice, a latte, a croissant and a quarter of a baguette with jam – I know, it was a little dear for my own liking. However, the location was fantastic. The customers that were already present appeared – and here I am making an assumption – to be academics of the university. Despite failing to understand the French language I was enticed by their hand gestures and pace of speech – they spoke endlessly. Outside my window was a young lady reading – perhaps she was a student there. 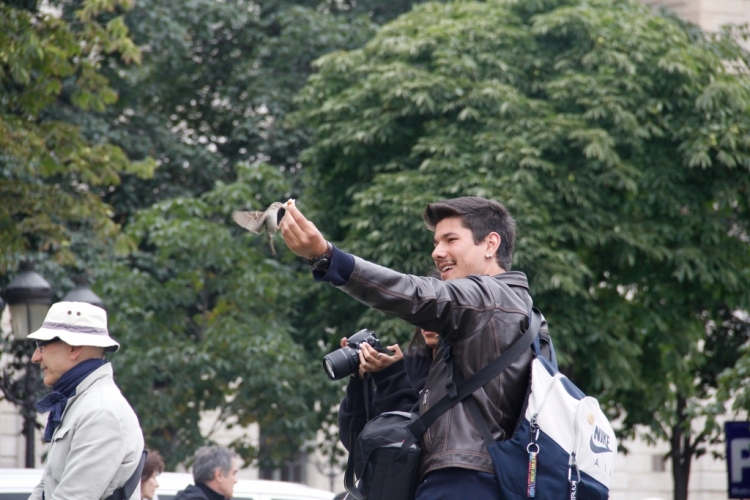 How long is he going to hold that pose for?

Upon making my way to the Panthéon I was greeted by a familiar face from our group, followed by another who warned us that the church-now-turned-mausoleum was closed until 2pm. We decided to meet other members of our group in front of the façade of Notre-Dame Cathedral. There we took conventional photographs which proved our presence, including some which created an illusion of leaning on either side of its 13th century towers. We also wondered where people were buying pieces of bread to lure the various birds into their hands. 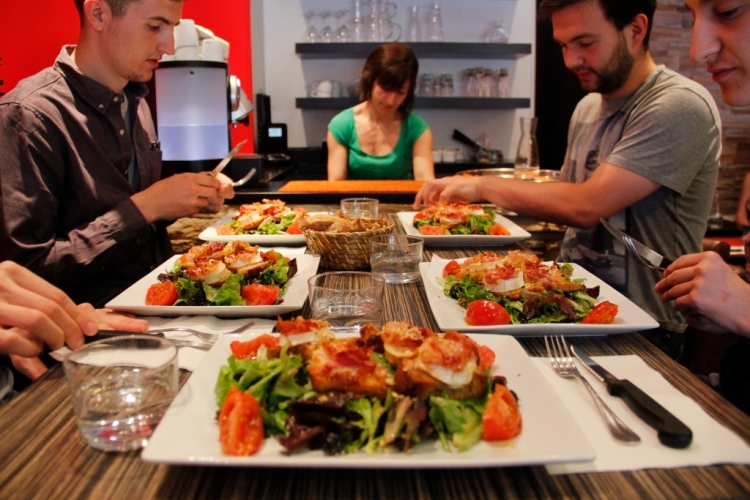 Having rested amongst the flocks of tourists queuing to enter this wonderful building, we made a brief stop back to the hostel before walking to Reid Hall via the Luxembourg Gardens. Our first activity of the day was lunch at the Art Macaron Pâtisserie, where we were served a fantastic goat’s cheese salad and a choice of two macarons for dessert – I chose the mojito and lemon flavours, the former being surprisingly strong, and both had a very thick filling. One of the guys around my table was eating macarons for the first time. I remember that feeling nearly two years ago in December from which I decided upon the Christmas flavour (cinnamon, orange and chocolate) – to fit in with the festivities along the Champs-Élysées – from Ladurée. Our table also went on a roll with word puns – I love word puns.

The topic of discussion this time was the changing French elite in an age of Revolution, exploring the justifications and ideas behind concepts of merit and honour. The seminar was led by Professor Ambrogio A. Caiani, starting off with Louis de Rouvroy’s offended reaction to the Audience with Cardinal Chigi tapestry (1667-72), the 7th in a set of tapestries depicting episodes from the Life of Louis XIV, based on drawings by Charles Le Brun.

The Audience with Cardinal Chigi, after Charles Le Brun, 1667-72. Image via www.chateau-meudon.wifeo.com.

We compared the roles and privileges of the nobility during the pre-Revolutionary monarchy with those after the 1789 French Revolution, including understanding the different characteristics associated with different kinds of rule – despotism with arbitrariness and fear; republics with altruism and virtue; and monarchies with law and honour. It is in the latter where problems arise due to varying justifications and definitions of one’s ‘honour’.

After the French Revolution of 1789 the nobility were stripped of their privileges due to the Declaration of the Rights of Man and of the Citizen of 1789, allowing for a fairer system by which professionalism and one’s virtues were focused, rendering birth rights obsolete. Eventually, their titles and coats-of-arms were also surrendered – blank façades on the outside of buildings show the demolition of the latter – and so were chivalry (replaced by the Weapons of Honour) and the monarchy, creating the First French Republic in 1792.

The Order of the Legion of Honour.

And then came Napoleon Bonaparte, a figure uncompromised by the Revolutionary past. In an attempt to combine merit with honour and to recognise the efforts of citizens as well as soldiers, Napoleon established the National Order of the Legion of Honour, an order that was split into five degrees or classes: Knight, Officer, Commander, Grand Officer, and finally the Grand Cross. Due to its non-exclusivity, one’s merit and honour could be determined by their virtues and professionalism during civil service.

By 1808, titles and coats-of-arms were re-established but the privileges did not. Since the nobility were no longer exempt from tax, tax became a measure of professionalism, ironically privileging the nobility in the long-term. A constitution was also created, following decisions about the best system of government for the country, of which the Old Monarchy seemed the most preferable. Louis-Phillippe I became ‘King of the French’ in 1830, abdicating in 1848 – we were shown one of Honoré Daumier’s caricatures of the king which compared his head to that of a pear. This eventually led to an election and Louis-Napoléon Bonaparte was voted by public opinion, establishing the Second Republic between the French Revolution of 1848 and the 1851 coup, and later the Second French Empire in 1852.

Honoré Daumier, A huge pear hanging by the commoners, after Charles Philipon, 1831. Image via www.wikimedia.org.

However, a dilemma still echoes through to the present day: what justifies power and how do you determine who is fit to rule?

Following this intensely heavy crash course into the history of France, we were taken to the Musée national de la Légion d’Honneur et des Ordres de Chevalerie to see first-hand these various orders not just in France but from all around the world. I was, however, rather disappointed that the Order of Santiago in Spain was missing from their collection – as were many other significant orders – into which the painter Diego Velázquez was admitted. On the other hand, Denmark had the Order of the Elephant. 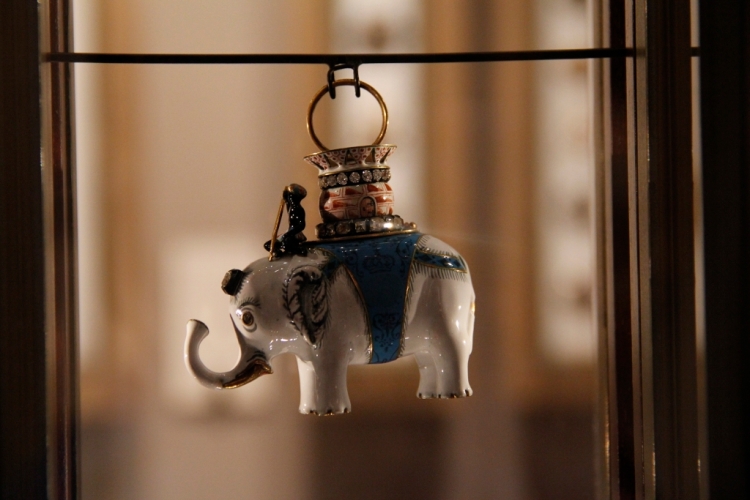 Denmark’s Order of the Elephant.

The day concluded with a walk towards Les Invalides where Napoleon’s tomb resides, followed by Ambrogio’s treating us to a drink at a local wine bar and then our own picnic on the terrace back at the hostel. I particularly enjoyed the time at the wine bar due to the varying nature of the conversations I actively participated in, of which two topics were rather memorable; the first was introversion and the second, feminism and equality.

The topic of introversion is one that I can relate to completely, being an introvert myself. We discussed this in the context of “can you see yourself living in a big city?” This eventually led to talking about the social expectations and problems experienced by introverts in a society that highly admires the so-called ‘extrovert ideal’ while its polar-opposite is shadowed in a negative light. As Susan Cain writes in her book Quiet: The Power of Introverts in a World That Can’t Stop Talking:

“Introverts, in contrast, may have strong social skills and enjoy parties and business meetings, but after a while wish they were home in their pajamas. They prefer to devote their social energies to close friends, colleagues, and family. They listen more than they talk, think before they speak, and often feel as if they express themselves better in writing than in conversation. They tend to dislike conflict. Many have a horror of small talk, but enjoy deep discussions.”

“Whoever you are, bear in mind that appearance is not reality. Some people act like extroverts, but the effort costs them energy, authenticity, and even physical health. Others seem aloof or self-contained, but their inner landscapes are rich and full of drama. So the next time you see a person with a composed face and a soft voice, remember that inside her mind she might be solving an equation, composing a sonnet, designing a hat. She might, that is, be deploying the powers of quiet.”

I was also delighted to find out that one of our group was an INFJ, according to Carl Jung’s Myers-Briggs Type Indicator (MBTI) personality test, of which I am also in the same category.

Trivia: INFJs are supposedly the rarest of the 16 MBTI personality types, making up between 1-3% of the world’s population.

The discussion on feminism touched on various topics of influence. There was the sexualisation and inequality of gendered commercials, gender asymmetry in Anglophile linguistics and social usage, and even the Biblical story of the Fall of Man. All of these things have a negative view on women, leading them to be extremely susceptible to criticism. The conversation actually sparked from an earlier discussion about the feeling of being watched when a man enters a gay bar, something that all women can relate to, leading to the unwritten social expectation that men should be chivalrous or insist to buy a girl a drink – even if she doesn’t want one. And then there’s the unwritten expectation of men that the girl somehow ‘owes’ them something, which is almost certainly the expectation and ‘right’ for sex.