Dear readers. How often do you look carefully at the buildings portrayed in paintings? How many times have you focused on the painted surroundings more than the figures in the image? For the majority of you, “very little” is likely to be your response. Building the Picture attempts to reverse this, forcing us to look deeply at the uses of architecture in Italian Renaissance painting. 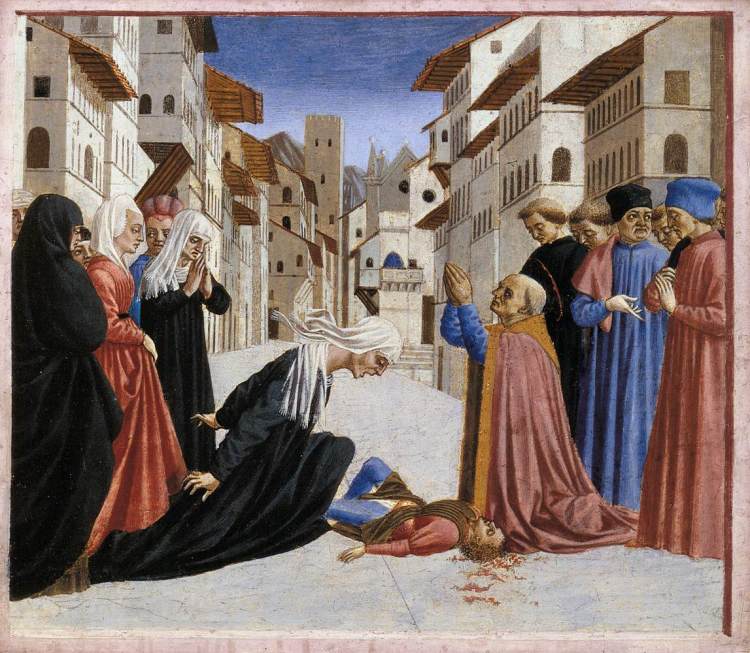 Domenico Veneziano, The Miracle of Saint Zenobius, about 1442-8. Image via www.wikipedia.org.

There is a rather beautiful point to this exhibition that makes it slightly more appealing than other architecture-related displays. Every brushstroke in a painting is a conscious choice made by the artist. As a result, the buildings and their architectural structures were put there for a reason. As curious human beings we are naturally attracted to the question of “why?” From experience, especially with contemporary art, I find myself asking “why did the artists make this? What were their reasons? What were their intentions?” And then you get people like Jackson Pollock who just let paint drip over large pieces of canvas. Italian Renaissance artists did not go without intentions, even more so when painting to the demands of their patrons.

Ever since the invention of Albertian perspective by the Italian humanist Leon Battista Alberti in his treatise On Painting, artists began to revolve their painted subjects around the settings themselves like stage sets in a play. They would commonly begin by painting their architectural surroundings first and then allocating their subjects as they wished. Countless preparatory drawings over the centuries have an intense focus on architectural studies in preparation for larger paintings such as Lorenzo Costa’s Christ in the House of Simon the Pharisee (about 1500) in which the size of the large room is contrasted with the much smaller occupants. 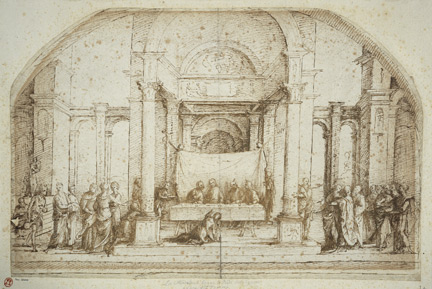 Lorenzo Costa, Christ in the House of Simon the Pharisee, about 1500. Image via www.nationalgallery.org.uk.

Many commissioned paintings had very specific locations in which they would be shown. To emphasise their illusionary qualities, the artists would usually incorporate the architecture of their paintings to suit those of the surrounding areas – Leonardo’s Last Supper (1495-98) is a fantastic example. The niche effect was perhaps the most common and we see this in the Carnesecchi Tabernacle (1435-43) fresco by Domenico Veneziano, which was displayed within a niche on the outside of a street corner.

The use of architecture as stage sets could be taken further. In Carlo Crivelli’s Annunciation, with Saint Emidius (1486) the Virgin’s holiness is symbolically represented by her physical isolation from the outside world, locating her within a room in the company of the Holy Dove. Antonello da Messina does a similar thing in his Saint Jerome in his Study (about 1475) where the location of his study is placed in the centre of a large vaulted building, suggesting the significance of his Latin translation of the Bible – the Vulgate – and his role as one of the four Fathers of the Church. This painting also has an interesting framework around it, alluding to our presence as a voyeur, and the portrayal of the interior suggests intimacy between us and Saint Jerome. 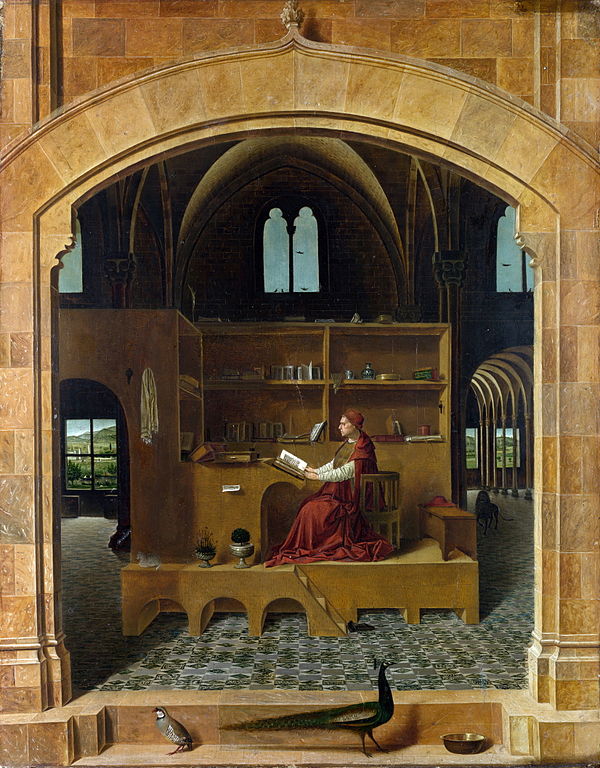 Antonello da Messina, Saint Jerome in his Study, about 1475. Image via www.wikipedia.org.

Very often artists would use real-life buildings in their works, usually to contemporise the scenes depicted and enhance the viewer’s relationship with it. Veneziano’s Miracle of Saint Zenobius (about 1442-8) is a special case of historical accuracy in art. It shows the patron saint of Florence reviving the dead son of a widow on the Borgo degli Albizzi – the actual street it was rumoured to have occurred on.

Other settings are more fictive in their representation, the classic case being Solomon’s Temple in Jerusalem which was originally demolished. The twisting, spiralling columns featured in Marcello Venusti’s Purification of the Temple (after 1550) were traditionally believed to have come from the original site. The architectural setting of the painting was also influenced by the discussions at the time concerning the rebuilding of St. Peter’s. Kingston Lacy’s unfinished Judgement of Solomon (1508-10) by Sebastiano del Piombo is one of many other representations, showing the temple with a nave and side aisles like an ordinary church. 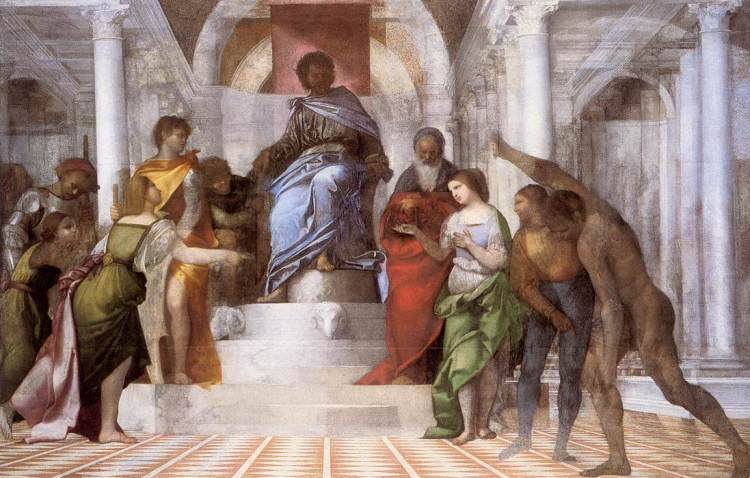 Sebastiano del Piombo, The Judgement of Solomon, 1508-10. Image via www.wikipedia.org.

Ruins were also a popular motif, often used to accompany nativity scenes. Girolamo da Treviso’s Adoration of the Magi (1525) is a grand display of the famous Bible story, even more dramatic and direct in Baldassare Peruzzi’s drawing from which the painting is based on, shown together side-by-side in the exhibition. The ruins in the picture represent the breaking down of the Old Kingdom, literally replaced by the New Order and the Kingdom of God upon Christ’s birth. There is also an allusion to the passing of time and of time passed, leading artists to use ruins to explore the ancient and contemporary worlds, such as in Andrea del Verrocchio’s ‘Ruskin Madonna’ (1470-5) in which the unrecognisable ruins allude to their physical and mental loss in the people’s minds throughout the passage of time. 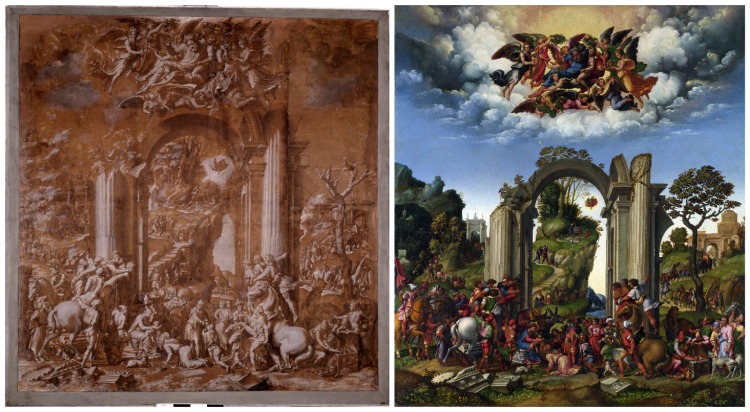 This is perhaps one of the best free exhibitions the National Gallery has ever held. Drawing primarily from its own collection with several exceptional British loans, the show is very simple and straightforward to understand. It addresses many basic uses of architecture in painting and the iconographic content explored provide even the most inexperienced visitor with just enough information to read deeper into Italian Renaissance paintings. With high-quality international loans, this could serve as a foundation for even bigger and better exhibitions dedicated to architecture in Western European painting.

Building the Picture: Architecture in Italian Renaissance Painting runs until 21st September 2014 at the National Gallery in London, www.nationalgallery.org.uk.