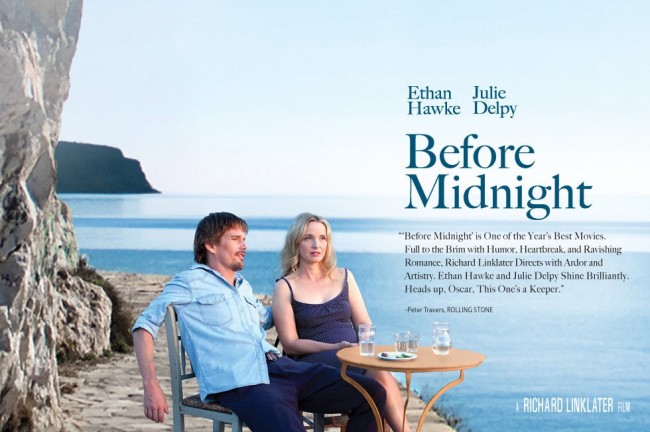 Continuing on from the cliff-hanger ending in Before Sunset (2004) – which tortured die-hard fans of the series for another nine years – we are once again reunited with our dashing Jesse (Ethan Hawke) and the lovely Celine (Julie Delpy). But who’s that accompanying them? Their very own twin daughters – both fast asleep in the backseat of the car.

Still retaining the characteristic dialogue-driven format of the preceding films, Before Midnight (2013) is an allegory to middle-aged life. But being in the genre of romance, it is also a testament to the hope, and disappointment, of an everlasting love. Children have been born and raised. Jobs have been tried and tested. Past loves have come and gone, while current loves are being doubted. Set amongst the beautiful villas of Greece, our now-fortysomething protagonists are beginning to feel the effects of their middle years. Jesse is inclined to move to Chicago to be closer to his son Hank – whom we first see in the opening airport scene in Kardamyli – while Celine is troubled by the disappointment of her career in Paris as well as her failing complexion. And it all converges on a single question: Did Jesse make the right decision to miss that plane nine years ago? 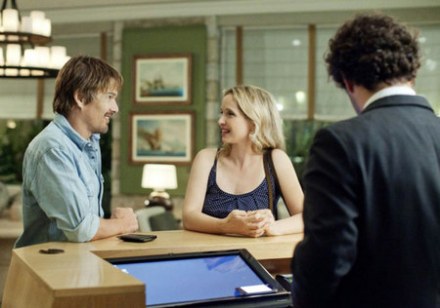 Through the deep, highly naturalistic – yet highly scripted – conversations, we can clearly feel the tension of a deteriorating relationship. And our first main indication of this is when Jesse asks Celine if she’d join him in Chicago. Their relationship is contrasted by three other couples during a group lunch, of which love was a topic being discussed. There is a young Greek couple, happy and completely satisfied with each other, yet both completely aware that relationships don’t last forever. The second couple is around the same age as our protagonists. They, too, seem happy with each other, as if no problems have ever arisen between them. But it is the third couple that truly sends us sinking deep into our seats, portrayed within the heartbreaking monologue of an elderly widow.

She tells us about the comfort and security she felt when her husband held her hand. She’d remember little things that he used to do, sometimes with precise detail. But over the course of time, she began to forget some of those things. Sometimes she’d envision her husband as if he had never left her. Other times he’d just disappear. “He appears and he disappears, like sunrise and sunset.”

“He appears and he disappears, like sunrise and sunset.” Image via www.elle.com.

While strolling around the villas, consequently entering a tiny Byzantine chapel, Jesse and Celine reminisce about their early romance – “How long’s it been since we wandered around, bullshitting?” asked Celine – and whether they would have still found each other attractive if they had first met in their current state back on that train in Vienna. But it is in the penultimate scene when the initial tension finally cracks. We begin to see Celine’s feminist persona once again and the couple argue like any other married couple – except they aren’t actually married. Doors are slammed, angry gestures are implemented, and pure rage overcomes our lovely French girl.

The director Richard Linklater has done such a brilliant job with this romantic trilogy that he truly is to be congratulated. His conversation-driven style for these films make them stand out amongst conventional films of the same genre. The setting of time is limited – just over 12 hours for Before Sunrise (1995), an afternoon for Before Sunset, and about another 12 hours for Before Midnight. The plot, too, is limited, being entirely conversation-based, but as a result it avoids a lot of messy subplots found in conventional romances. These three films honestly fit the label of ‘simple but effective’, as if it was coined specifically for them. 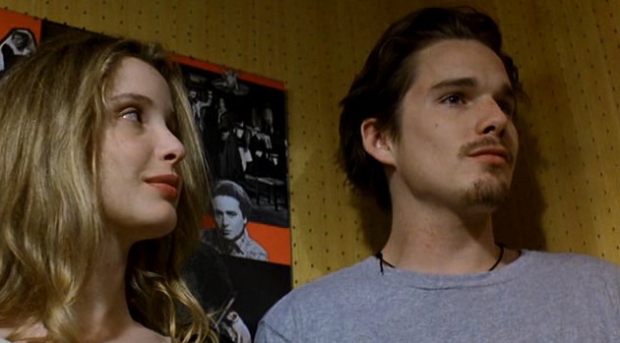 Our protagonists back in Before Sunrise, in a hilariously awkward music store scene. Image via www.empireonline.com.au.

The cast are incredible at what they do. They make it look so simple, acting as if they weren’t acting at all. The dialogue flows coherently like any typical real-life scenario. Several of the scenes – even the lengthy ones – were shot in a single take, lasting well over 15 minutes. Hawke and Delpy reprised their roles perfectly as if 18 years didn’t change a thing to their characters – or themselves. I particularly adored Delpy’s patronising sarcasm, reminding us of her younger self back in Before Sunrise.

I cannot recommend this film enough – or the entire trilogy, for that matter. It is incredibly executed and a true hidden gem amongst the multitude of overused, clichéd plotlines found in the majority of romance films. Its unconventional style of expression both captivates the audience and stands out from the directorial norm. The characters are likeable and the film’s exceptional realism allows us to sympathise with them, recalling our own life experiences at the same time – Before Sunrise was actually inspired by Linklater’s own encounter with a certain Amy Lehrhaupt back in 1989. The trilogy is a brilliant take on a promising long-term relationship. It gives us hope, but it also opens us up to a few home truths about life. As tempting as it is to ponder upon the possibility of finding the ideal soul mate, things don’t always turn out as we hope they would. Jesse and Celine may come across as the perfect couple in the first film – maybe even the second – but this final chapter enlightens us to the fact that really, they’re just ordinary individuals like us, connected by love, but tested by reality.

A trilogy NOT to be missed!

Double thumbs-up from me! Own photograph.

2 thoughts on “Before Midnight – the perfect conclusion”