Before you enter this exhibition, you must be aware that the title is Ice Age art: arrival of the modern mind. The objects we see are not meant to be critiqued in our usual sense of the term ‘art’. Instead, we are to see them as merely the results of a developing mindset. It is an exhibition about human progression. While the Natural History Museum in South Kensington gives us displays of evolving skulls, the British Museum attempts to shed light on the psychological processes of our ancestors through a visual medium that is, for the most part, universally understood by the citizens of Earth.

Female nudes at various stages of pregnancy. Image via www.gazettenet.com.

Exhibiting a total of 157 objects (I actually counted), the showcase splits itself into several themes. Some are quite general, such as ‘art and music’, while others are much more specific, e.g. the female nude, decorated batons, etc. One particular theme struck me as particularly odd, labelled the ‘Renaissance’. I felt that this was a rather risky attempt to allocate such a specific label to a period where line drawings of animals on bits of ivory or bone were found in abundance, as opposed to the sculptural works of the previous sections.

Furthermore, the objects are loosely arranged in chronological order, starting from 40,000 years ago. Because of this time difference, we shouldn’t expect any particularly large objects to be on display, an expectation that proved disappointing for a family friend of mine. We must understand that our ancestors would have had very limited resources to produce these works, even if they did have the privilege of carving into mammoth tusks. These ancestral works are also compared to more modern artworks where possible – 12 of them, to be precise – including abstract sculptures by Henry Moore and George Brassaï, as well as a nude drawing by Henri Matisse. I was rather surprised Picasso wasn’t included. 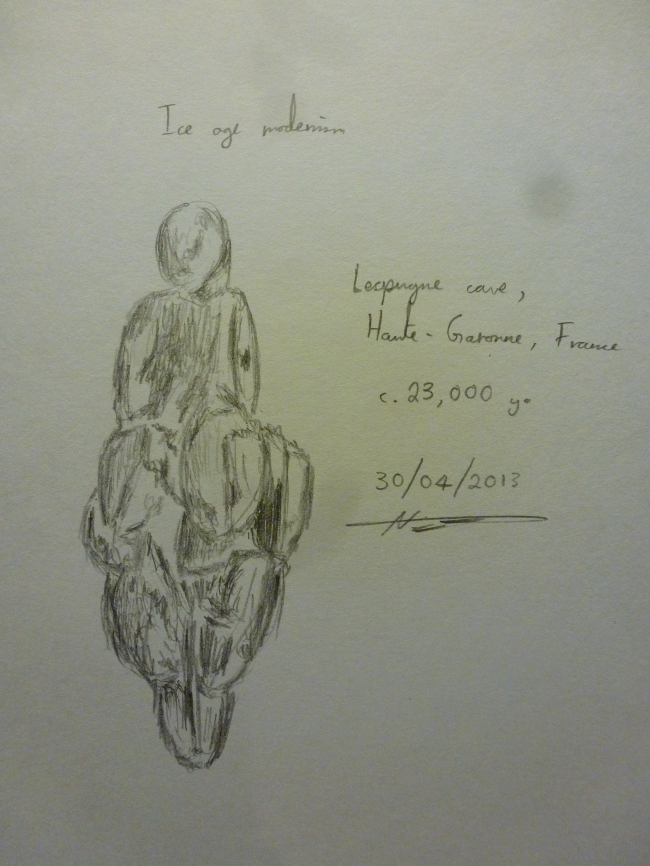 The Lespugue woman. Own photograph.

The first object we are faced with upon entry is a 23,000 year old figure of a woman from Lespugue, France. Appropriately labelled ‘ice age modernism’ the figure – no more than 5 inches tall – gives a sculptor’s inner vision of the essential elements of a woman and mother. Despite her half-broken features, she is clearly represented with large breasts and hips, accentuating her sexuality. This reminded me of several psychological studies that explored men’s preferred sexual and physical attributes in women. It was found that in less developed parts of the world, men preferred large hips because they were a good indicator of a woman’s fertility. These attributes are shown in various forms across the entire exhibition, specifically the section on the female body, where we find the oldest portrait of a woman (over 27,000 years old) contrasted with a simplistic sketch on an ivory flake shown directly next to it, referred to as the ‘Mask’. 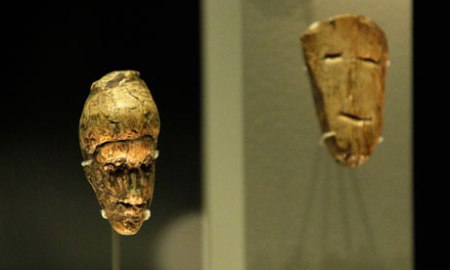 The oldest known portrait of a woman (left) and the ‘Mask’ (right). Image via www.guim.co.uk.

For music, we are shown a beautifully crafted flute, said to be between 36,000 and 40,000 years old. Despite being such a banal object in our day-to-day lives, I couldn’t help but feel a certain intimacy towards it. To me, this was the only object in the exhibition that genuinely brought me closer to the ancestors of so many years ago. It was the only object where the ancestral musician must have placed his/her lips close to the hollowed object, blowing into it to release a pleasant sound. There would have been direct contact between instrument and musician, and this is where it touches me most.

The rest of the exhibition focuses on the line drawings that manifest into spiritually-charged carvings on everyday objects, such as spear-throwers, also known as batons. Another section devotes itself to the abstraction of the female body, followed by a dark room with a projected film showing us cave paintings and frequently used markings. The last room, entitled ‘art and mind’, gives us a general overview of the uses of these drawings. Some are turned into maps, others as historic documentation such as in the Aurochs Hunt, a story about three figures hunting an auroch. 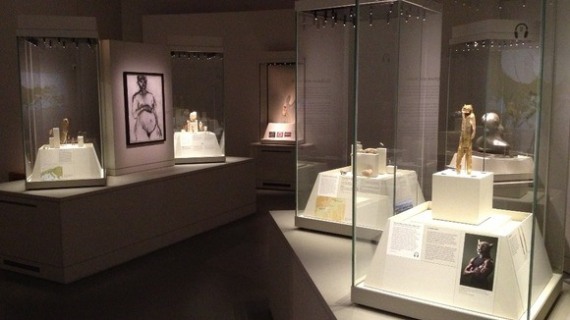 The exhibition, based on its curation, seems to be an overview of art’s uses during the Ice Age, yet it goes deeper by exploring the belief systems of our ancestors. We learn that art had a special significance at the time, being capable of invoking the powers of spirits, consequently leading to its employment as decoration. But the part that really makes the title appropriate is the focus on one’s ability to express an idea. In the case of the Lion Man, found in Stadel Cave, Germany, it is a prime example of the human capacity to imagine non-existent things.

The Lion Man. Own photograph.

Unfortunately, this exhibition does have its flaws. The curation is quite poor, since there doesn’t seem to be much consistency between sections. The introductory texts are placed in such a way that they seem almost obsolete. As for the captions, there are no clear markers (usually numbered) to indicate which texts correspond to which object, thus easily confusing its visitors. The objects are mainly placed in a mass group of up to 12 objects, encased in a glass display which visitors have to walk around to see. I can understand this format for a single item, but for a grouping, it would have been much better if they placed them in rows for us to walk through.

And last, but not least, the price. A standard adult ticket to this exhibition costs £10, which for a display of this size is probably not worth it. Seriously, you could easily finish this exhibition in under an hour. For £15 you could get into the Life and death: Pompeii and Herculaneum exhibition beneath it and you’ll have a much lower chance of disappointment – trust me, I saw it and it was brilliant, despite having to rush it. The curation is much better, much more captivating, and extremely moving when one enters the final room of plaster casts.

Overall, if you’re curious about how people perceived the world 40,000 years ago, crafted their creativity into ivory and stone, and come out realising that their mindset wasn’t that much different from ours today, then by all means check it out. But for the cost of a tenner, don’t expect it to meet your money’s worth. It’s engaging to a certain extent, I must admit, but even my £5 ticket with a National Art Pass left me slightly disappointed.

If the human mind is of particular interest to you, I could suggest a free alternative currently exhibiting at the Wellcome Collection in Euston. They have an exhibition entitled Souzou: Outsider Art from Japan which brings together the creative works of 46 mental patients from Japan. I shall be reviewing this in my next post, so keep watching!

Life and death: Pompeii and Herculaneum runs until 29th September 2013 at the British Museum, London, www.britishmuseum.org.