Aside from the London Eye which is relatively close by, the Hayward Gallery has been attracting quite a lot of attention to its Light Show exhibition…and there’s a very good reason why it’s named a light ‘show’ rather than ‘exhibition’.

The exhibition is an exploration of light as an artistic medium, through a very limited selection of only 25 works. It explores psychological responses to illumination and colour, while in some other works political concerns are addressed, such as in Jenny Holzer’s MONUMENT (2008) – a semicircular tower of alternating bands of LEDS displaying the texts of US declassified documents that include testimonies by soldiers, officials and detainees, complete with censoring punctuation.

Upon entry our eyes are immediately caught by Leo Villareal’s Cylinder II (2012) – a.k.a. the publicity piece, of which its image has been reproduced in countless brochures and posters scattered around parts of London. It consists of 19,600 white LEDs arranged into 5 columns of cylinders that spread outwards from a central cylinder. The lights perform a non-repetitive sequence of displays that can have varying interpretations depending on their effect on the viewer. There were times when the sparkling effect reminded me of Christmas, while the ascending columns of light looked like teleportation rays – I wonder if aliens are real? Behind this first piece was Magic Hour (2004/7) by David Batchelor, a colourful collage of recycled lightboxes that explored the colours that characterised modern cities.

After a quick glance at these works I immediately noticed a problem with the lighting – ironic, isn’t it? The gallery wasn’t dark enough, or at least it was too easily affected by the nearby S=U=P=E=R=S=T=R=U=C=T=U=R=E (2010) by Cerith Wyn Evans – a three-column piece characterised by the glowing and dimming of incandescent strip lights, complete with heating effects, that was analogous to breathing. I must admit, the radiating warmth helped emphasise this analogy. The flaw was that it was meant to be the breathing of unearthly spirits, usually characterised by coldness. Nevertheless, it was a nice source of heat against the cold British weather – I know right! It’s April and it’s still cold!

Moving on, in a lovely pitch black room nearby, was my favourite piece from the entire exhibition: Anthony McCall’s You and I, Horizontal (2005). I’m pretty sure a large majority of the visitors would agree with me that it was the coolest piece there. Using a video projector, computer scripting and artificial mist, the piece encourages visitors to walk through the light that the projector emits onto the opposing wall. The alternating projections are easily identified as a travelling wave and an ellipse. Visitors essentially ‘interact’ with the light. There is a temptation to touch the light, as if it is a solid object – hence why McCall calls it a ‘solid-light’ film. With the ellipse you feel trapped, the light enveloping you as you watch others walk into the light (literally), their silhouettes drowning with every step. As for the travelling wave, the light seems to cut through you, its edges distinctly visible, yet you can never really see that infinite line – believe me, I tried. Others saw it as a bookshelf, as a physical object to place everyday items on…and when they do, reality strikes: it’s still just light. This is an incredible illusionary piece and I absolutely recommend anyone to experience it.

The next gallery room welcomed us with a rather nifty little piece involving a light bulb and its reflection. Entitled Bulb Box Reflection II (1975), Bill Culbert presents us with an unlit light bulb whose reflection depicts a lit light bulb. Creepy, eh? Even weirder is that the mirror functions perfectly as a normal mirror. My assumption is that he used a one-way mirror, since they are transparent enough to let light through, as was obvious in Iván Navarro’s Reality Show (Silver) (2010) and Burden (Lotte World Tower) (2011) shown in the gallery upstairs. One thing about Navarro’s work is that he likes to play with endless reflections, creating the illusion of neverending spaces.

In a separate room is another illusionary piece that could have worked better with a matching white floor instead of a wooden one. Conrad Shawcross’ Slow Arc inside a Cube IV (2009) features a bright light at the end of a moving mechanical arm, encased within an isometric cage. There’s a strange sense of being inside that cube, as if you were the source of light itself, the moving shadows on the walls shifting with every move. I came out of the room a little disoriented, however. It is probably worth mentioning that Shawcross designed another mechanical arm piece entitled Machina (2012) for the Royal Opera House/National Gallery collaboration of Metamorphosis: Titian 2012 during the London 2012 Cultural Olympiad. This piece was used in the ROH’s ballet of the same name – gosh, that was a brilliant production – and a smaller version, three times smaller, was displayed in the National Gallery’s accompanying exhibition. It was rather effective at representing Diana’s omnipresent gaze in Ovid’s Metamorphoses. The arm itself was actually programmed to follow Shawcross’ movements. I assume the same was done here.

Back to the exhibition, Chromosaturation (1965-2013) by Carlos Cruz-Diez plays with our perception by the use of three monochromatic colour chambers – blue, red and green. The installation is supposed to create ‘a space where colour acts with all its force on the spectator’s skin, objects and surrounding wall surfaces.’ Cruz-Diez sees colour as a ‘situation’, something to be perceived and interpreted. The adaption to each monochromatic situation is paralleled to the adaption of real-life situations. I must say that entering the red chamber from the blue one was quite painful to the eyes. On the other hand, sitting around in the green chamber was rather relaxing. My green leaver’s hoodie was fitting in quite well too.

The upstairs gallery was rather interesting, but only a few works were of particular interest to me, such as the Navarro works and Holzer’s political display. Brigitte Kowanz exhibited an intriguing, yet rather simple, Light Steps (1990/2013) which gave the slight illusion of a floating staircase. The other work of interest was Olafur Eliasson’s Model for a timeless garden (2011), a piece that used strobe lights to essentially ‘freeze’ the motion of the accompanying water display, enabling us to see live water droplets. For any Tate Modernists, you might remember him from his 2003 Unilever Series piece, The Weather Project, which evoked the form of a radiating sun disc with the luminance of a setting sun.

The top and bottom of the interior of Reality Show (Silver), 2010. Image via www.juliaclaxton.net.

Overall, the exhibition is an interesting showcase of light pieces that love to play with our eyes. There’s definitely a piece for everyone. Whether they can be called art or not is still up for debate, but many of them are definitely conceptually intriguing. To be able to turn something ordinary – something we rely on every day and take for granted – into a captivating, sometimes thought-provoking, display is certainly worth our admiration on some level. These works go deeper than to just entertain us like fireworks on New Year’s Day, and that alone is probably enough reason to spark the let’s-check-it-out switch in our heads. So what are you waiting for? If it’s attracted this much publicity, it can’t be that bad, right?

Furthermore, until 21st April, as part of the Alchemy festival there will be a food market serving truly lovely food from India, the UK and South Asia. I really recommend the masala chai tea from Chai Fusions. In a very interesting blend of spices and tea that works incredibly well. 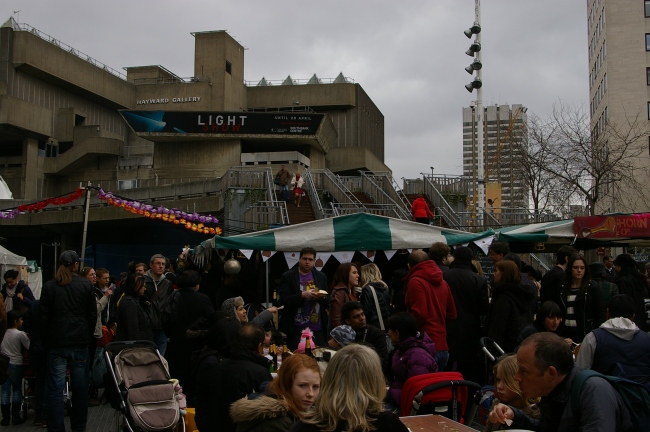 Everyone loves a good curry, right? Own photograph.