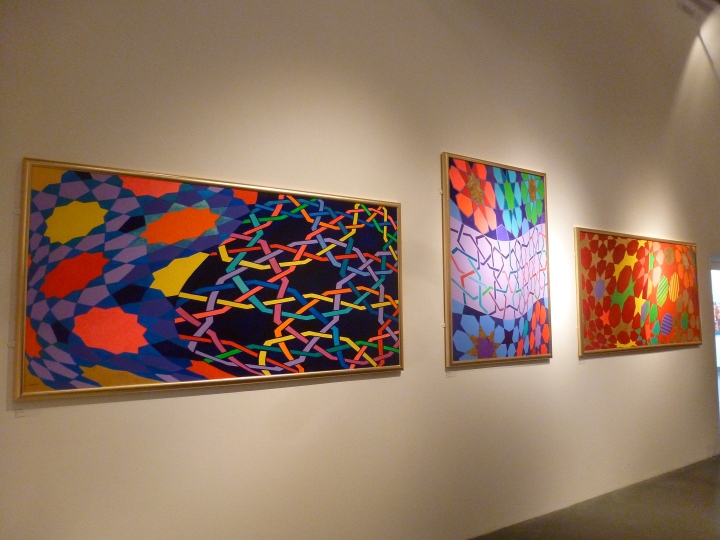 When we think of Palestine, usually the first thing that comes to mind is the ongoing conflict between Israeli and Palestinian forces. We’d hear about the bombings in various parts of the state, about the numbers of people killed on its surface. Studio 3 Gallery’s latest exhibition is a celebration of the works of several contemporary Palestinian artists. Their creative works are the product of a resilience to create such works during times of conflict. Experiences of suffering and loss, freedom and hope, are captivated and shared through the medium of art, as if illuminating its audience with the happenings of a devastated land. 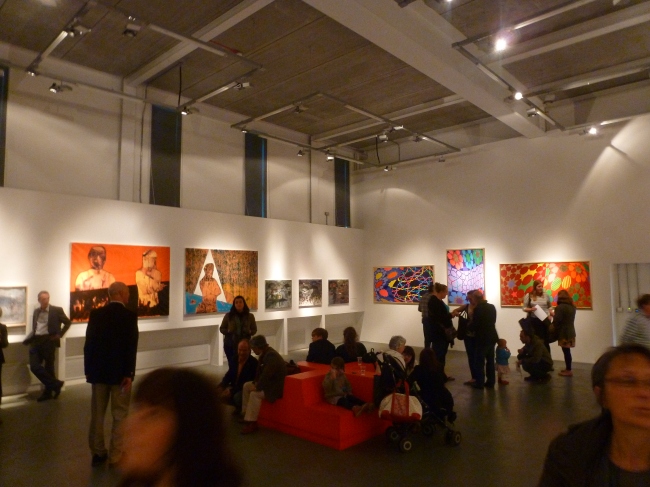 Private view of the exhibition. Own photograph.

As we walk along the corridor of the School of Arts building, we are immediately faced with the works of Majed Shala, whose imposing paintings combine traditional Arabic script with a contemporary exploration of the human form and its environments. On the opposing wall are Raed Issa’s colourful renderings of Palestinian houses that hint at the original structures and the lives that occupied them before they were turned to ruins.

Eventually we enter the actual gallery space, dimly lit, with the giant doors of the fire exit standing out in the far corner where a student invigilator attempts to read through tediously thick art history books. Hanging nearby is The Arab Spring is Not Yet Complete (2011) by Hani Zurob, a square canvas depicting a seemingly chaotic scene where the figures are screaming and shouting, their hands raised in the air, while the bottom of a shoe almost appears to come of its surface, violently infiltrating the space of the viewer. Furthermore, the fragmentation and negative filtering of the forms is reminiscent of war documentaries, the canvas turning into a film still of a tragic moment.

On the left-hand wall are the mixed media works of Laila Shawa and Taysir Batniji’s My Mother, David and Me (2012) film installation. The former is a mixture of overlaid calligraphy on surveillance camera stills and brightly coloured screenprints inspired by pop culture. Inside Paradise (2011) encloses a horrific scene of charred human remains within a beautifully-decorated black painted border, ornamented with realistic renderings of birds and Islamic patterning. From my perception of the work, the border seemed to represent the media, acting as a barrier that framed, idealised, and censored the outside world’s perception of the devastation. Shawa’s interest in traditional designs is prevalent in her earlier work from 2008, shown nearby, which involves painting colourful and mesmerising geometric shapes that allude to the vibrancy of stained glass windows. Personally, these were probably the ‘happier’ works in the exhibition.

On the opposing wall are Hazem Harb’s bold, figurative mixed media collage works that deal with themes such as human suffering, trauma, war and global instability. Flanked on either side are the less colourful and quite disturbing paintings of Mohammed Joha, an exploration of the experiences of children and their loss of innocence and freedom in a tormented state. Freedom (2009), a depiction of a child holding a dove of peace spoke to me most. Enclosing herself into the corner of a room, the eyes of a little girl stare at the viewer with a universal concern for peace, her body kneeling as if in an act of prayer. 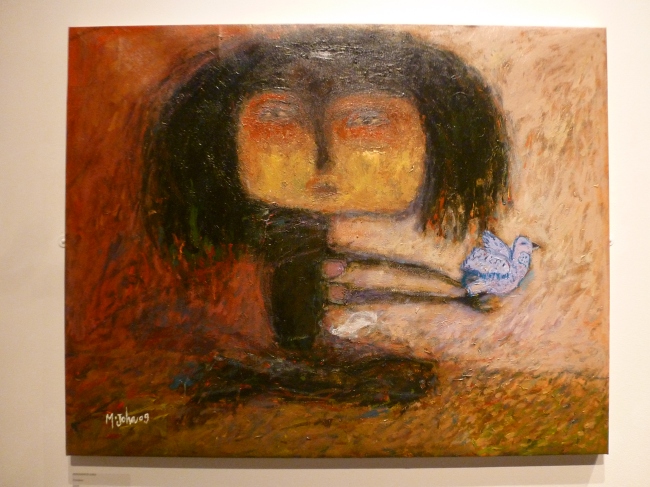 Overall, this seemed to be a very well thought out exhibition, curated by Ben Thomas, lecturer and curator at the University of Kent, and Aser El Saqqa from the Arts Canteen. The exhibited works give a heightened sense of emotion that stirs a rather uncomfortable feeling in the viewer, moving them and potentially bringing back the images and documentary footage of the conflicts. In some cases, they are dramatic, some even slightly comedic – as was the case with Shawa’s We Can (Impossible Dreams) (2011) – but most of the time they are disquieting, and in the end we can only think of one word. Tragedy.